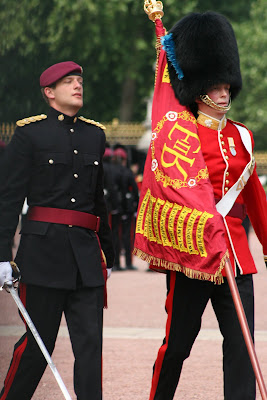 First of all, let me start out by saying, "Cheerio" (hello) in true British fashion! What an amazing action packed time I spent in Britain as the guest of the British Dyslexia Association or BDA as it is more commonly known! This is my second time on British soil this year, and true to form, I hit the ground running! I first hopped on the iconic double decker red bus and began exploring this historical and infamous city known as London. 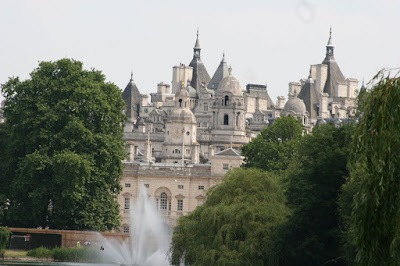 London Park ~ Where I Spoke to Students about Dyslexia
I was amazed by sites such as the Parliament Building, The London Tower, London Bridge, Buckingham Palace, St. James Park, and what girl could resist a visit to Harrod's renowned department store and Prestat, the chocolatier to the Queen herself! Yum! I even learned that Big Ben is not the clock tower, but rather, the bell within it! The timeless charm of London was better than I could have imagined and I was truly captivated. Had the scenery and rich history of this city not already won me over, the people that I had the privilege to meet certainly would have.


The combination of the two was a recipe for one memorable and meaningful trip.
The next day, I boarded the London tube, otherwise known as subway in the states, and headed for Bracknell, England which is headquarters for the BDA. Upon my arrival I received a very warm welcome from my friends at the BDA. As always, they made me feel right at home. In fact, during my first trip last summer when I explained that my suit case had broken, they even went the extra mile and ushered me over to the local department store and assisted me in ordering up a new and more improved piece of luggage! We grabbed a quick bite of lunch and then boarded a train with BDA director of education, Dr. Kate Saunders, and her awesome assistant Kat. We then headed for the our target destination: The Annual Dyslexia Conference.
Several hours later we landed in Leeds, a charming little town, and began preparing for a conference regarding teaching techniques and technology that can be effectively used within mainstream school systems. Educators came from near and far to learn techniques used by experts in the field who experience success in teaching dyslexic children to read. 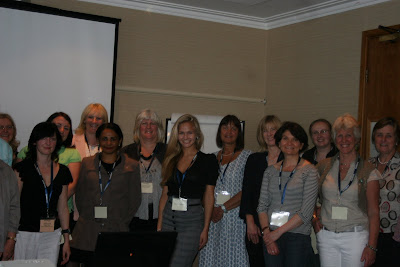 British Teachers at the Annual Dyslexia Conference
I was so honored when Kate actually asked me to speak to this group of professionals about my experience as a dyslexic learner. My main message to these educators was to have faith in their students- see their ability. Every child can learn they just don't all learn the same so I urged them to please take the time to figure out what works best. If we work harder to celebrate uniqueness and strength instead of focusing on weakness and shortcomings all of our children will maintain their confidence and belief in themselves. Confidence is the key, whether dyslexic or not, but confidence is particularly important for a dyslexic child.
I would like to thank Dr. Kate Saunders, mentor and fellow dyslexic, for having the confidence to put me out there, front and center, to share my experience. She is truly an amazing, talented, and special individual. I will never forget this wonderful experience and plan to return year after year.
After my time in Bracknell and Leeds came to an end it was back to London for a visit to Parliament. This building is such an amazing work of architecture and thanks to the BDA I was escorted on a private tour of the House of Lords and House of Commons and was able to watch a parliamentary debate. 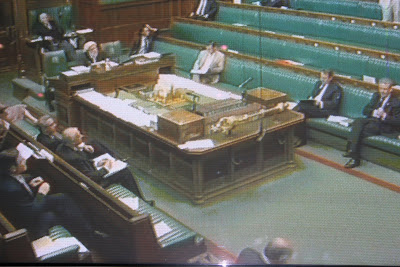 My view of the Dyslexia debate in the House of Lords
I was also included in the All Party Parliamentary Meeting where legislators and experts discussed the ground breaking Jim Rose Report that was passed while I was right there in London! What good luck to watch history in the making as eight million dollars was allocated to train 4,000 teachers in England! This was such an honor. 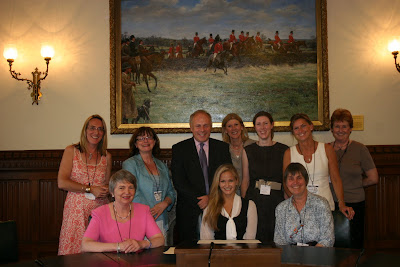 Members of the British All Party Group in the House of Parliament
While in Parliament I also had the opportunity to meet dynamic leaders in the British dyslexia movement, such as British Minister of parliament Nick Gibbs, the BDA's CEO Judi Stewart, Xtraordinary People founder Kate Griggs, Lynne Greenwell of the Dyslexia-SpLd Trust, and BDA Parliamentary Officer Zahra Afshar to name a few. I was, and remain, completely motivated by these committed and driven leaders for the dyslexic cause. 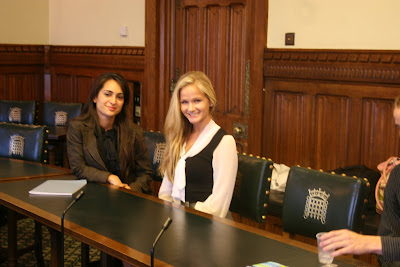 Meeting with Members of Parliament in the House of Commons
No trip to London would be complete without a visit to Harrod's Department Store so I returned to their exquisite tea room where I enjoyed the delicious scones with clotted cream and freshly made jam complemented by the most delicious cup of English tea ever. Given the fact that my visit to the United Kingdom was so wonderful and smooth I'll spare you the details of my plane ride home! I'll give you a hint: it involved a cancelled flight, a change in airports, and a forced overnight at an airport hotel!
Despite the perils of travel, I would pack my bags again and visit the good people of the BDA and of London. Thanks to my title as Miss Teen International, and the endless support of Mary and Mel Richardson, I have been able to visit the United Kingdom twice this year to meet with the BDA and collaborate on an international level to promote my platform of dyslexia. What an opportunity of a lifetime!
Cheers (goodbye),