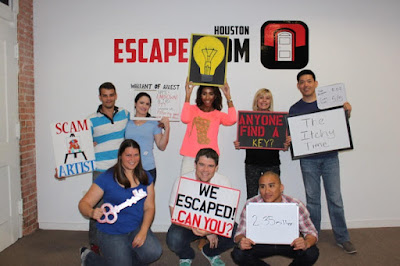 I recently went with some coworkers to Escape The Room! They have different rooms set up to where you are locked in and use clues to find a key to get yourself out. It is so much fun, but it can also be used as a team building experience, which is why we were there! My team and I decided to do two different rooms, and then the staff would debrief us on our strengths and where we could improve. When it was time for my team and the staff to evaluate me, I was named the "supporter" of the group. At first, I was disappointed that I did not get named what I thought to be a more "important" role. To me it seemed like being named the executive or the thinker would be more significant. However, when I listened to what my coworkers had to say about why I was helpful to the team, I realized that my job as supporter was just as important as all of the other roles.

In life, we are put into different "teams". It can be a team at work, at school, or within your family. It is important to learn what your role is in that team. There may be times that you think your role is insignificant. However, every person on the team is important. Without your contributions, your group may not be able to achieve as much or have the same impact. So I encourage you to spend some time thinking about what role you play on the different teams of your life, and how you can continue to use your strengths to make a difference!

Continuing to break the stigma,