My Memorial Day Weekend included spending the day at Charlotte Motor Speedway with four Army Rangers from Fort Benning.  We had a full day planned for them, but like most adventures there can always be some surprises.

The first question I asked our Rangers was, "Who is your favorite driver?"  SGT Roberts liked Dale Jr., Specialist Baxter liked Carl Edwards and then Specialist Potter and PFC Toll both shared they didn't know much about the sport.  I love when there are newbies!  Our Rangers are highly skilled men who adapt and relate to all environments, so taking them behind the scenes at their first NASCAR race would be very exciting for them.

After taking a pace car ride, touring pit road, the infield Goodyear Tire Center, the Winner’s Circle, being introduced to the NASCAR Officials and each tech inspection station, I then introduced them to a very special man, my husband, Chip Bolin.  Chip gave them the behind the scenes tour of the #17 race hauler, opening their eyes to the side of the sport very few get a chance to experience.  Our Rangers kept looking at me with big smiles and a thumbs up, stating they had no idea all that went into being a competitor in NASCAR.

So, my newbies, Specialist Potter and PFC Toll, were pretty geeked at this point.  Our next adventure was the mandatory NASCAR Driver and Crew Chief meeting.  For those who know, this is the one location, during each race weekend, where all of the competitors are in the same room, at the same time.  If you are a fan, it’s a lot to wrap your head around.  If you are new the sport, it really doesn’t hit you until later.

We had a few Driver meet-n-greets lined up for the Rangers, but being in the same room with ALL of the Driver’s allowed them to also meet their favorites and get tons of autographs and photographs.  While this was all going on, SGT Roberts turned to me and asked if I’d take a photo of the group with the dignitaries seated at the front of the room.  So, I turned to see who they were talking about and I’m instantly greeted by three of the most decorated military hero’s we’ve ever had attend a race!  What an honor – for me!

What happened next was truly the most memorable event of the whole weekend.  I walked over to our military hero’s to thank them for their service and invite them to meet our Rangers.  These heroic gentlemen were so excited!  They couldn’t wait to talk with the Rangers!  To be witness to all of this was so heartwarming.  Each of them idolized the other.  What a delightful surprise.  (It was also fun to see the reactions of the Drivers and Crew Chief’s who were around us.)

After the Driver’s meeting we ventured to the start/finish line to see Darius Rucker, aka “Hootie” for those of you from my era.  Then, we took part in one of the most patriotic pre-race ceremonies of the entire race schedule complete with a military band, B-52 flyover, 21-gun salute and over 5,000 guests from each branch of our United States Armed Forces.

As the drivers headed to their cars, we headed to the top of the race haulers where our Rangers were able to get a bird’s eye view of the excitement.  SGT Roberts cheering for Dale Jr., Specialist Baxter cheering for Carl Edwards.  So who did Specialist Potter and PFC Toll root for?  They’re now fans of two-time Daytona 500 Winner, Matt Kenseth.

Thank you to the Army Rangers for spending the day with us and enjoying the sport of NASCAR.  My husband and I thoroughly have enjoyed getting to know you all.  For all the Army Rangers, and all of our service men and women, thank you for fighting for our freedom.  God bless you all. 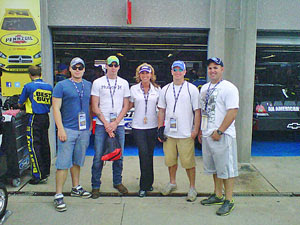 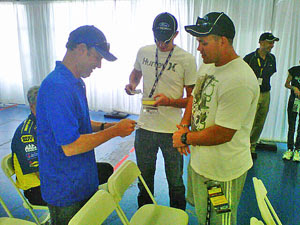 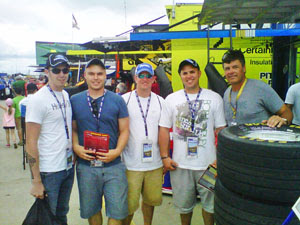 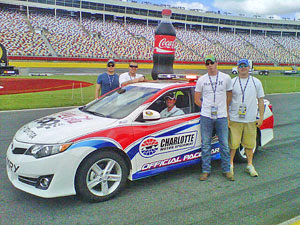 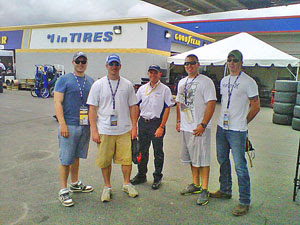 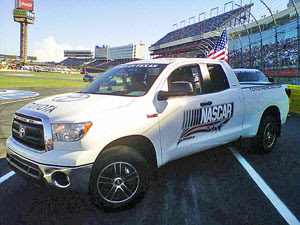 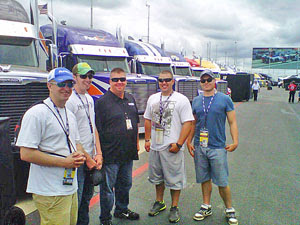 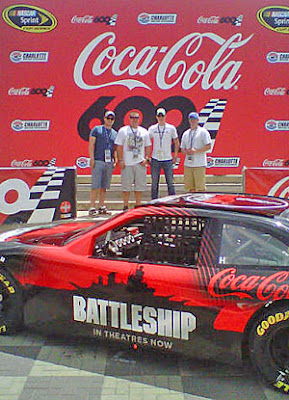