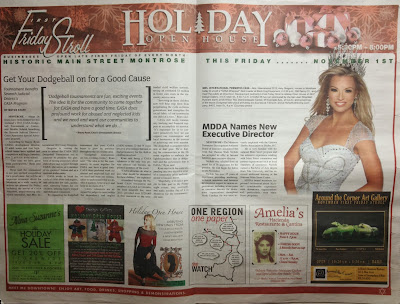 Before I even arrived in Colorado, the Western Slope had done a wonderful job promoting CASA and the upcoming dodgeball tournament.  They also did a bang-up job welcoming me to the Montrose, which is a, “2013 All-American City,” not far from fantastic ski resorts at Telluride and Crested Butte. The weather is typically mild and they rarely get snow although white-capped mountains surround them. I arrived to discover a piece of heaven where I was invited to be a part of festivities to raise awareness and funds for CASA of the 7th Judicial District.  The district encompasses 6 counties in Colorado and covers 10-THOUSAND square miles! 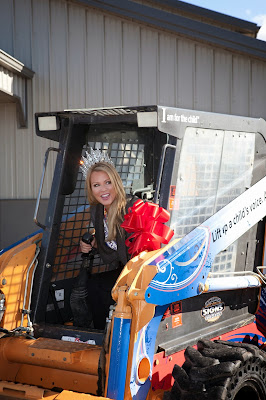 They actually put me behind the gears of the loader! Watch yourselves!

My schedule was efficiently packed for the two days I spent there.  After landing, I unveiled of a skid loader shrink wrapped with the CASA logo.  For the next year, a portion of its rental fees through Black Dog Equipment will go back to CASA of the 7th Judicial District (CASA of 7JD). The next stop was the Montrose City Hall for a reception where I met dignitaries and CASA volunteers who were so kind and warm.  We were able to discuss the goals of CASA and the needs of the 7JD.  But the day was young!  It was then time for me to sound the horn for the 5K fun run. From there, the CASA staff and I were driven to downtown Montrose to meet with local businesses including the A+Y Design Gallery, which is where I met more CASA volunteers and some who will hopefully become advocates. 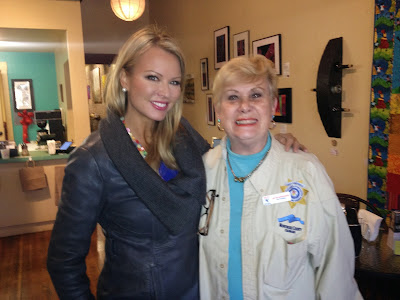 We had a great time chatting about CASA and the area. 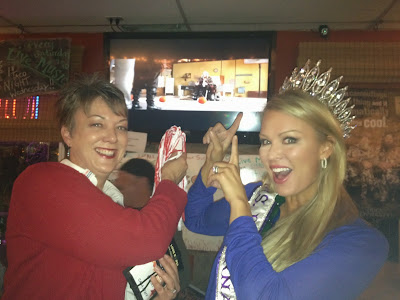 With CASA 7JD Development and PR Director Stacey Ryan at a showing of the movie, “Dodgeball.”

We then kicked-off a couple of showings of the hilarious movie, “Dodgeball.” It was  a way to rev up the teams who had come to compete the next morning. I was able to speak with everyone about CASA and why it is so important to support CASA. It was such an inspirational evening to meet and talk with everyone.

Then it was time to return to the hotel, where I was showered with gifts from CASA of the 7th Judicial District and Montrose.  They had also saved newspapers with articles about CASA and the International Pageant System for me to keep! 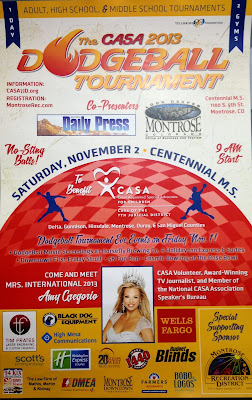