What’s on your Tombstone? Part 1 - Peter

For those of you that are old enough to remember the phrase “What do you want on your Tombstone”, this is not the pizza ad.

With the lighthearted start, it is time to take a turn in the other direction.

Recently we have buried a family member on Fred’s side, and a friend. One by their own choice, and the other killed by a drunk driver. I suppose getting older includes burying more friends and family as time passes, but it doesn’t make the losses any easier.

Less than a week ago I attended the funeral of someone who was not just a former co-worker, but we coached soccer camps together, talked life, our families and faith.

Peter Underwood was 31 years old, it was around 7am on a Saturday morning and the drunk driver entered a freeway ramp the wrong way hitting and killing Peter upon impact as he was driving. The drunk driver survived and is fine. One man killed, a man who has impacted literally thousands of lives around the world, with two children 2 years old and younger, a woman now a widow and a community in morning. It can hard to make sense of it, and I am sure many will ponder losing such an innocent wonderful person for many years, especially when those two young kids realize daddy will never again come home. That is what struck me the most, the kids never really knowing their daddy. 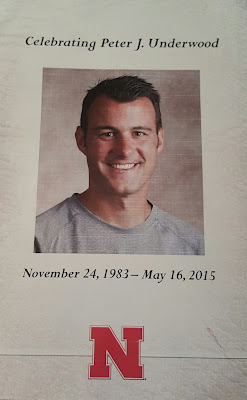 We had just finished the Race4Souls and was supposed to immediately leave to drive the 14 hours to Pittsburgh for American Ninja Warrior. As I got in my car heading towards the freeway, in every sense it felt like just going in the wrong direction. Trying to shrug it off, I kept driving for a little bit until the feeling was so overwhelming it could no longer be ignored. For the first time, turning away from a major endeavor and heading home, sitting that night with my family entangled in my arms felt like the best place in the world to be. Three days later sitting in a chair at Peter’s funeral watching his kids stumble around at the as their dad lay inside the enclosed casket, tears rolled from many people’s eyes before anything even started. 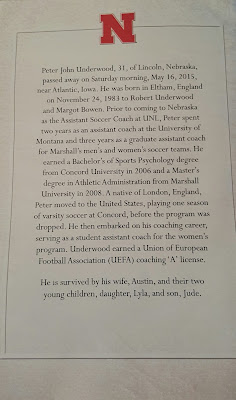 Person by person, they got up and shared about Peter, who he was to them and how much the world is a better place by his time on earth. It reminded me of attending a women’s leader luncheon a couple years ago and each of us had to write what we would want our Tombstone to say.

A man of faith lived out by his actions to others.