It is often said that, “Southern is a frame of mind.” Living in the South is a lifestyle that just cannot be compared to others. I have noticed throughout my travels that even though sometimes I feel so busy and maybe even a little overwhelmed, here in the South, we are accustomed to a much slower pace of life. Fortunately, our slower way of life has a way of teaching us what truly matters: faith, family, and……DUCKS! I know what you have to be thinking….ducks?! Well, if you did not know, another southern tradition comes in the form of hunting. Although it is a controversial subject that I most definitely do not have the answer to, one southern family became millionaires because of their love of hunting water fowl.

Meet the Robertson family! Phil Robertson founded the Duck Commander brand after he discovered his knack for making duck calls. Along with his sons, family members, and friends, Phil’s duck calls are now the basis of a multi-million dollar company. Since founding the company, A&E began following the family in a series known as “Duck Dynasty”, which received the highest ratings of any show ever aired on the network. Duck Dynasty, which happens to be my favorite show, is a series that not only showcases the family’s duck hunting skills, but also teaches viewers about the things that truly matter…faith and family!

The Dothan Rescue Mission presented “A Night Out With the Duckmen” as their annual fundraiser. Phil, Willie, Jase, and “Uncle Si” Robertson came to the Dothan Civic Center! You can only imagine how excited I was. The show sold out in twenty minutes during the ticket sales in early October. My brother and I were so thrilled to find our tickets in our stockings at Christmas, and we had been looking forward to the show ever since. The “Duckmen” were definitely a hit!

They presented an inspirational message about the importance of staying true to oneself and most importantly, giving all the praise to the Lord, no matter what level of success one achieves. After the show, the audience was invited to ask the cast questions about the show. When an audience member asked what Miss Kay’s favorite thing to cook was, Miss Kay surprised us all when she walked out from behind the curtains! Tonight was definitely a night I will never forget. I am so blessed to have had this experience. 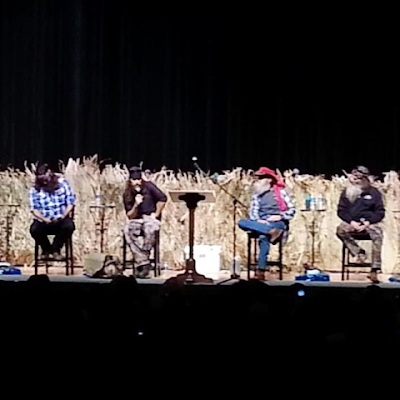