In February, a dear family friend, neighbor, and one of my biggest role models, lost her life in a tragic car accident. Cara McCollum was an absolute ray of sunshine wherever she went. She was blessed with the most beautiful spirit and passion for giving. I truly believe that the example she set helped me develop that same sense of caring and desire to improve the life of others. I am truly blessed and my life is richer for having known her. I felt the need to share her story as it helps me deal with my own grief, and I hope it will help you to know that just one person, in such a short period of time, can have such an impact on others. Based solely on the number of people affected by the Facebook page “Prayers for Cara,” in the twenty-four years of her life, she would have had to impact 171 people a day. I have come to realize just how important it is to be a role model because you never know how many people you may influence along the way. 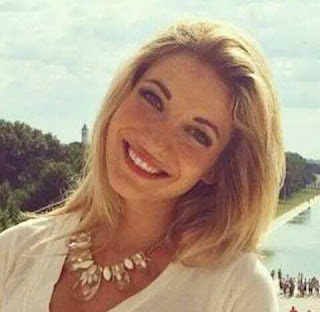 Cara had just celebrated her 24th birthday the week before the accident, but she had already reached so many of her goals, and her future was so bright. Growing up in our small town of Forrest City, Arkansas, many people think they can never dream so big, but Cara had such an amazing gift for leadership and such vision that she never thought for a minute that she wouldn’t go as far as she set her mind to go. Cara graduated Valedictorian of Forrest City High School and attended Princeton University, where she earned her degree in English and Journalism in May of 2015. She was hired as the lead anchor for SNJ Today, a news station in South New Jersey shortly after graduation and was just beginning her dream career. I told you she dreamed big! Never be afraid to set goals for yourself and DREAM BIG!

Her parents rushed to New Jersey as soon as they heard the news. Her mother, Mrs. Maureen, told me at the funeral that they stayed at a Ronald McDonald House right next to the hospital. It meant so much to me that despite her loss, she told me she thought of me while they were staying in a Ronald McDonald House. This is a direct quote from her, “Our room was bright yellow with Legos everywhere, but we didn’t care.” We giggled and she told me it was now one of her favorite charities too!

Cara loved books and wanted to share them with everyone. She always worried that many underprivileged children may not receive books and the value of literacy, so she created the Birthday Book Project when she was only sixteen (that’s my age.) It started with the Toys for Tots program and she would set up her table full of books for the families to select from as they came through picking up Christmas presents for their children. She said that many of them would pass right by the books, so she started sneaking them in their bags so the children would have a book on Christmas morning. It grew into a much larger program distributing gift wrapped books to all elementary students in St. Francis County on their birthdays. When she moved to New Jersey to attend Princeton, she took the program there too. The Birthday Book Project has continued to grow each year and was recently honored by President George H.W. Bush’s Points of Light program, which was established to encourage the spirit of service. The exciting thing for me is that after she moved to New Jersey, other young people in my community, following her lead and with the help of Cara’s mother, have kept the project going strong. She was a role model to many. 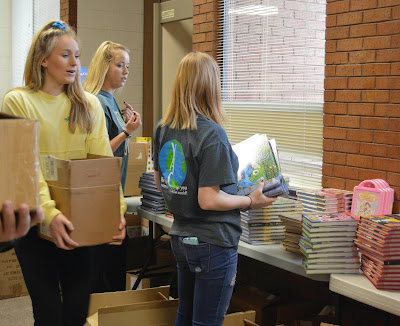 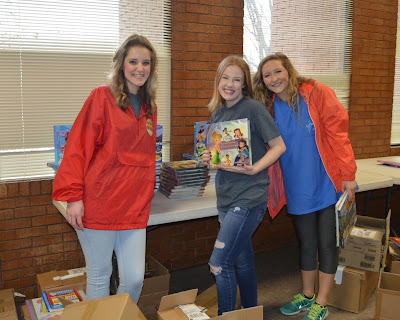 The week of her death, homes, yards, and businesses in Forrest City have displayed unmistakable aqua blue ribbons which serve as a sign of support for literacy, and a celebration of the life of Cara McCollum. While our entire community and beyond is saddened by her loss, the blue ribbons are a reminder of the legacy that Cara has left behind and the lives she has touched and will continue to touch through the Birthday Book Project. A Birthday Book Project endowment is being established in her memory and it will provide books to elementary students throughout the entire state with the hope of expanding nationwide. She is smiling from heaven! Let’s all follow the lead of Cara McCollum, who had a vision to go above and beyond and did it! “In the end, it’s not the years in your life that count. It’s the life in your years.”

After Cara’s funeral, I decided to make my rounds in Forrest City to show you all just a small number of the businesses, homes, and churches marked by the aqua bow. 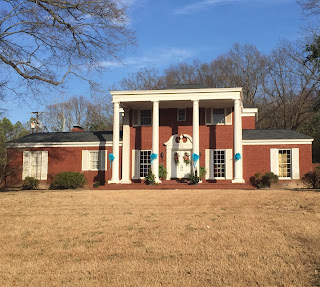 Insert photos: photos of me at other locations in Forrest City with aqua ribbons 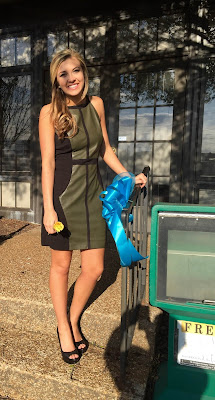 This is Times Herald, the newspaper. My yellow rose is just one small part of the family spray on Cara’s casket. Everyone who attended was invited to take a flower in remembrance of Cara, and to spread her light, once more, into the world. 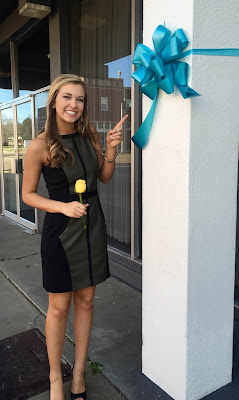 This is the main branch of First National Bank of Eastern Arkansas, my father is employed here. 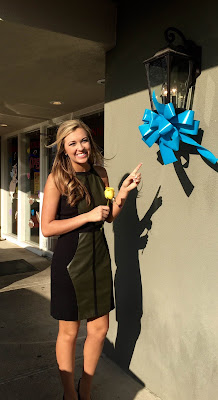 This is Delta Q, the barbeque place where the Forrest Citians go to get some good home cooking! 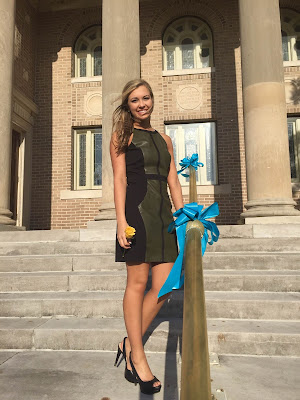 This is the church where Cara grew up worshiping the Lord. It is also where her funeral took place. 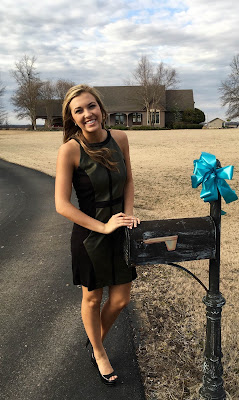 This is our home, among many, showing support and celebration for Cara’s life and passion for literacy. 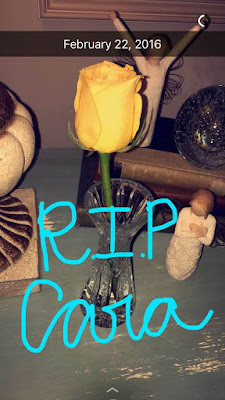 “Nothing is impossible, the word itself says ‘I’m Possible.” – Audrey Hepburn