What happens when you are 17 years old and become Miss Teen of Minnesota, judge a local pageant for younger girls, select the talented 16 year old baton twirler as a winner, who later attends Augsburg College (where you are a student), and then you both find yourself on the stage competing for the same title in yet another pageant? Well, this is exactly the path that the talented and successful Carla Jean Beaurline and I took to lead us to the interview you are about to watch! 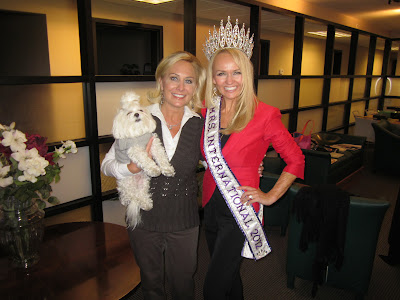 Carla is the owner and host of “Around Town” TV, which is a very popular cable television show on MCN Channel 6, here in the Twin Cities. Carla has been nominated to the Pavek Museum Broadcaster’s Hall of Fame, is a two time Twin Cities Media Network Diamond Awards for Television Personality of the Year, TV Sales Person of the Year, won a National award for 25 Women who Rule in Sales and Marketing, Upper Midwest Emmy Award Nominee and 10th Annual Better Business Bureau Integrity Award Nominee. She is a driven entrepreneur, devoted daughter, and we have remained friends for nearly 30 years. I often say that the best part about aging is the wisdom, experience, and friendships that come with it!

Thank you to my dear friend for asking me to do this interview, as it gave me an opportunity to promote the International system, share the message of “Go Red,” and of course talk about the Phoenix Society for burn survivors. Again, I hope you can sit back, relax, and enjoy this complete edition of “Around Town” TV (for your information the interview is the final segment and lasts approximately 6 minutes):  http://vimeo.com/51987042
Note - For any readers in the Twin Cities area, this starts airing Thursday October 25th at 5:30 PM and runs through Thursday morning November 22, 2012, which means it can be viewed 80 times in 4 weeks.