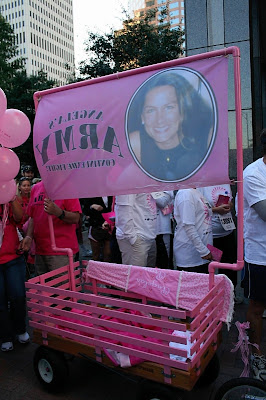 ﻿October is Breast Cancer Awareness Month and I want to honor the memory of those we have lost to this horrible disease and continue to fight for many who are beating breast cancer…to my Aunt Gloria, KEEP fighting! I love you!
This past spring was an extremely difficult time for my family. We lost my beautiful cousin, Angela Wike on March 14, 2010 and within 3 weeks we lost another hero…my grandmother, Verna Parker. Both, who touched my life in so many ways, lost their lives to breast cancer. I want to ensure that their lives and legacies are honored during this month and always.
Angela was a passionate woman about everything in life. She was smart, beautiful, focused, organized, and LOVED to shop…especially for any purse with a HUGE price tag! Haha! She was above all, a daughter, sister, and an amazing aunt! Angela was one of the most passionate individuals when it came to fighting breast cancer. She would stop at nothing to help others.

Part of her legacy is already being revealed…The Susan G. Komen race was held this past Saturday in Charlotte, NC. Close to 20,000 people were registered to walk/run (and in our case MARCH) for a cure. My grandmother was 84 years young when she received her wings on April 1st but I have never held a higher respect for another woman like I did my grandmother. She endured so much in 84 years of her life. She lost her mother when she was only 12 years old, she lost her first born child, her first born grandchild, became a widow at the age of 47, and buried all but 2 of her siblings before finally resting in God’s arms on April 1, 2010!

Through all of this, I never once heard my grandmother utter the words, “why me”, she was positive and uplifting. She loved the Lord, her family and her church family. She was always taking care of others! I miss her so greatly! 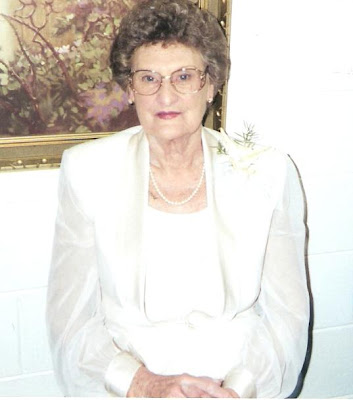 My beautiful grandmother, Verna Parker who’s favorite past time was watching and following pageants! Tall and thin but had the determination of an ox! I sure miss her spunk and loving spirit!
These remarkable women truly touched the lives of SO many! I am so blessed to come from a line of strong, determined women…I can only hope and pray that I will someday leave a legacy that will help others the way I see their stories impacting the world around me.
Anyone who knows anything about Charlotte, NC or the Carolinas in general know that “The Charlotte Observer” is THE NEWSPAPER!!
Look at the image that graced the cover of Sunday’s Charlotte Observer!!! You can see Angela's Army coming down Tryon Street!!! Making the cover of the Observer was more than icing on the cake!!! 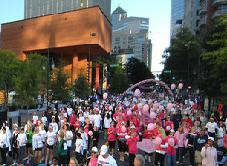 Charlotte Observer, Sunday edition
Angela’s mom, dad, and sister are so appreciative for all of the support and efforts in The Race for the Cure. Teresa, Angela’s mom said, “What a wonderful Race day we had. What a TEAM Angela's Army is!!!
Angela’s sister Amanda (our team captain) shared this with team members, “How emotional to see that flag flying high and all of us in our pink shirts! I am so amazed at our efforts. To know that on race day our team was #5 in Charlotte! That is an outstanding effort. We are not even one of the Panther players and have had zero media. AMAZING!! Our efforts could save the life of another person's daughter, sister, mother, wife, niece, aunt, cousin, granddaughter, sister-in-law and friend. Thank you again!” 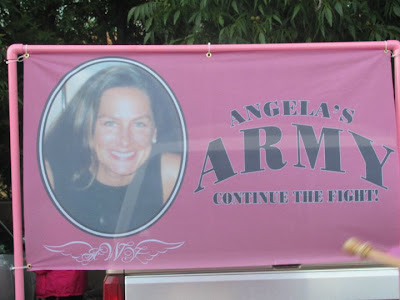 During this month, remember those who have lost their battle and honor those who are beating breast cancer! God Bless you all! 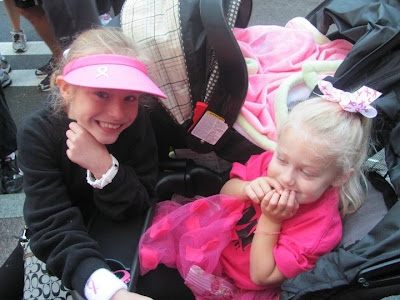 My niece, Hannah is pictured with Angela’s niece, Ella. 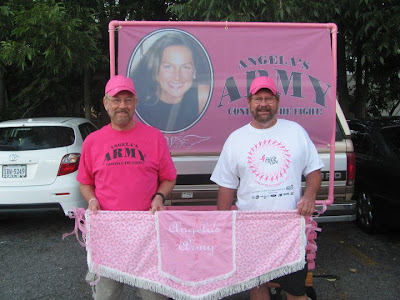 REAL MEN WEAR PINK!!! This has to be one of the best photos captured. Charlie, Angela’s dad (left) and my step-dad, Papa Gene on the right! I know Ang was laughing hysterically from heaven at these two! Way to go ANGELA’S ARMY!!!!
Until next post, remain blessed,