Thank you to Minnesota State Senator Bobby Champion for taking the time to sit down and discuss the importance of the Raise It for Health campaign, which is being supported by the American Heart Association (AHA). As Mrs. International 2012, I believe it is important to advocate for worthy causes in support of healthy living and to add a voice to important messages in recognition of our alliance with AHA.

For many of us, walking through the magnificent halls of our individual state capitols happens only on special occasions. And I don’t know about the rest of you, but I am always in awe of the size, textures, and décor of these impressive structures. As I waited in the rotunda for Rachel, my AHA partner for this particular meeting, I was soaking in the art work, ornate benches, columns, and massive volume of the space. It is truly beautiful.

Then, on my way out of the building I passed by the entrance to Governor Mark Dayton’s office. I could not resist visiting with his receptionist to learn that he was in a meeting, but that I was welcome to step into the Governor’s Reception Room, which is richly decorated with red carpeting, wood paneled walls highlighted by ornate gold trim, and a marble fireplace flanked by the United States and Minnesota flags. I was told visitors often take pictures by the fireplace; therefore, I just had to capture a shot for my memory book. Beyond the appearance of this room, there is an energy that is very much alive; with staffers walking briskly to and fro in business attire, doors opening and closing within the paneling that add an element of surprise, and constant conversations all around.

I hope the photo below gives you a taste of the richness I am describing, as well as, the art work behind me by Francis D. Millet (1846-1912) called The Treaty of Traverse des Sioux, which was installed in 1905. This painting depicts the signing of the treaty in 1851, where the Dakota transferred ownership of nearly 24 million acres of land in Minnesota and Iowa to the federal government. The “barrel” treaty assigned much of the money the Dakota received for their land to traders to pay off debts they were alleged to owe. The treaty permanently changed the lives of the Dakota, who were forced to move to small reservations. I find this to be a powerful painting. 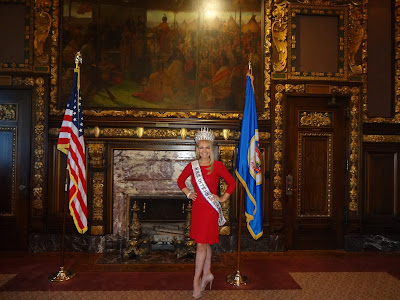