American pop band, Train, is scheduled to perform a pre-race concert at Daytona International Speedway prior to the Coke Zero 400. Train will autograph this guitar prior to performing in the pre-race concert. In addition to Train, this guitar will be autographed by the NASCAR Sprint Cup Series drivers and by the artist, Sam Bass.

A very special thank you to Sam Bass for donating this guitar. Sam Bass supports The NASCAR Foundation through his original art and graphic design. Bass has also hosted the NASCAR Day Telethon at his gallery three times. For more information on NASCAR Unites – An American Salute please visit NASCAR.COM/Unites 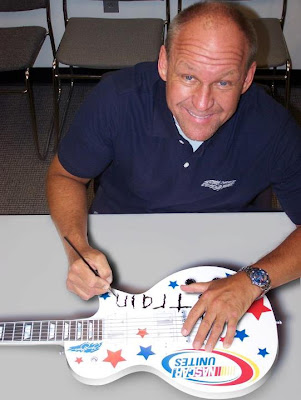