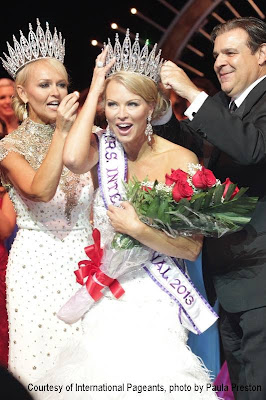 It has still not sunk in I am the new Mrs. International. This wonderful picture from Paula Preston helps!

How did I get here? It is by way of several states, some unexpected but earned opportunities, and because of a very large village of family and friends.

I was born in Michigan and from there my family moved to Texas, New York, South Carolina, Washington, and back to Michigan just after high school. That’s where I went to Western Michigan University and graduated with a B.A. in Communication Studies and a minor in Political Science.

I was not the classic four-year grad. It took me 6-years to finish because I worked for 5-years as a spokesperson with a major car company. Travelling the country over 100-days a year was perhaps the best preparation for taking on the world of broadcasting. 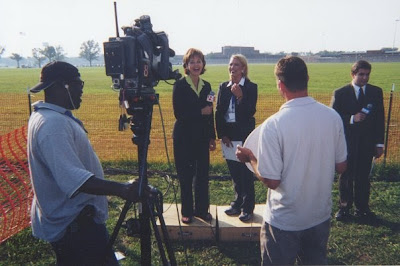 Professionally, I spent 12-years working as “AJ Sterling.”  An Emmy nominated TV journalist, I was voted, ”Best Reporter,” by the Associated Press. That particular award will always be a favorite of mine as it was based on a culmination of my work rather than just a minute and a half long story. Over the years, my reports have appeared on CBS, CNN, and Fox while working in the tri-cities of Tennessee, Nashville, Indianapolis and Chicago. I feel like I have seen it all and covered it in abbreviated form, meeting four US Presidents and a multitude of other leaders while reporting on many historical events.

Covering Super Bowls, riots and flying with the Red Barons has been thrilling, but not as exciting as life with my husband, John. He and I are the perfect mix of opposites.  He is an attorney with a firm in Chicago as he was when my sister-in-law, Summer, set us up while I was still in Indy. After a year of long-distance dating, we were engaged and I was soon moving to Chicago and planning a wedding. That was ten years ago. We are about to celebrate 9-years of marriage already! 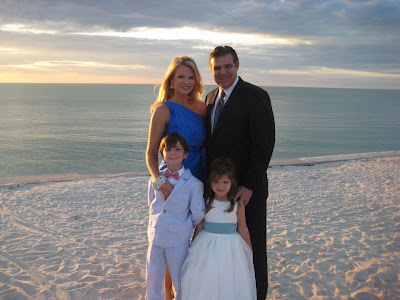 Our fabulous foursome this past November at our nephew’s wedding in Boca Grande.

We are the extremely proud, over protective parents to 7-year old Johnny and 5-year old Ali. We love them to the moon and back and I still can’t come to grips with the fact they are growing up so quickly.  It’s not fair! Make it stop!

I wish every child had the life Johnny and Ali have.  To be loved and to feel special…to know they are safe and can go somewhere at night when they hear thunder or wake with a nightmare. Sadly, that is NOT the case.  In fact, some children never hear the words, “I love you,” or are told they are valuable.  The nightmares come from what they have seen or endured.

That is why I am a CASA, or Court Appointed Special Advocate, in Lake County.  It is not just passion of mine, it is who I AM. After spending years covering the fallout of abuse and neglect, I took a step back from broadcasting and researched ways to use my skills on behalf of abused and neglected children. I am part of CASA’s Speaker’s Bureau and serve as a National CASA Ambassador. It has allowed me to partner with Prevent Child Abuse America and Child Help. Anything we can do to prevent the abuse and neglect is good for, “our,” children and for CASA. I will tell you more about CASA in the upcoming blog posts.  I could go on and on and on about my love of CASA and all those working to help these sweet babies who need someone to protect them and their rights to a life free from fear. So, that is just a little about me;) As you will find this year, I plan to tell the stories of those CASA helps, the class of 2013 and those I meet along the way.  It is such an exciting time that I am learning how to go to sleep while many plans are floating around in my mind.