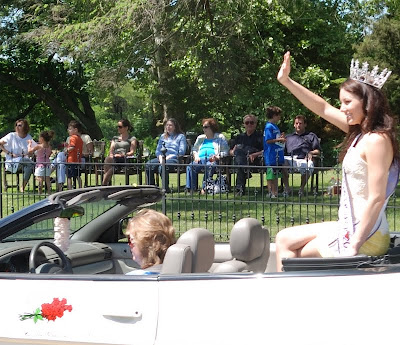 I was honored to be asked to represent the International Pageant System and ride in the Salute our Heroes Parade in Laytonsville, Maryland, a small town in the suburbs outside Washington, DC- and my home town! This parade was not only special to me because it is a big, annual celebration in my hometown, but also because I come from a Navy family. My grandfather on my mom’s side was a Naval Aviator and served during World War 2, the Korean War and Vietnam, so the idea of a parade to honor those who have served our country in the military, especially on National Armed Forces Day, was definitely appealing to me. 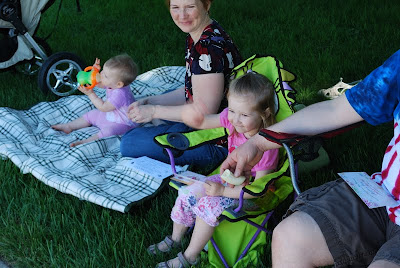 As I checked in for the parade, I was greeted by Mrs. Donovan, who was my fourth grade teacher at Laytonsville Elementary School (L.E.S.). When I was in fourth grade, Mrs. Donovan had been teaching at L.E.S. for 31 years, and she retired soon after I graduated, however, she often still substitute teaches at L.E.S. and had the pleasure to meet my younger brother Mac who had proudly told her that I was Miss Teen International and had even brought her one of my autograph cards that she told me was on her refrigerator. I told her that I would love to autograph an autograph card for her and did so- she was so excited. 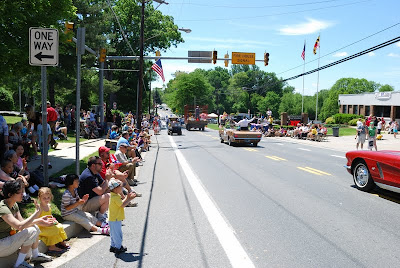 Originally, I was to ride in an antique Rolls Royce, but unfortunately due to mechanical problems with the vehicle at the last minute- I guess you can only rely so much on an antique- I rode in the back of my very own car, a Chrystler Sebring convertible. Some of the skills I have learned as a titleholder are to always be prepared for anything and everything and to adapt to whatever circumstances get thrown my way; I think I exercised these skills well in this situation! 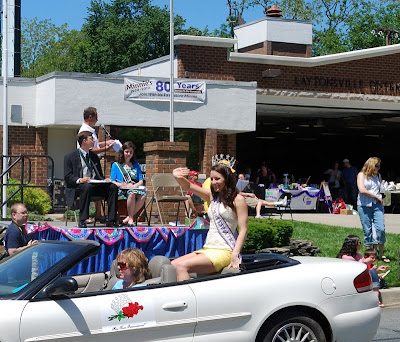 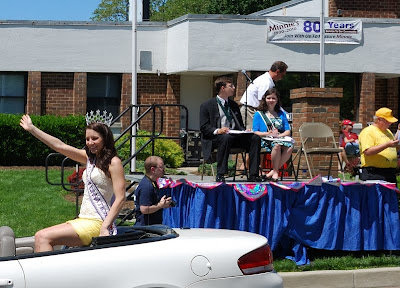 I also got to try out my sign that the wonderful ladies at WKRP had made up for me- “Miss Teen International”- complete with the famous crown and roses logo; it was so much fun and all of the members of the audience were excited to know that Miss Teen International was born and raised in Laytonsville! My younger brother marched with the Boy Scouts of America and my Dad stayed on the parade route as the dutiful photographer. He kept telling people, “that’s my daughter!” When the parade was over, we stopped at the local 7 11. I come from a very small town and there is one little strip shopping center, where the 7-11 is the high light. It was filled with parade participants doing the same thing as I was, beating the heat with a slurpee! 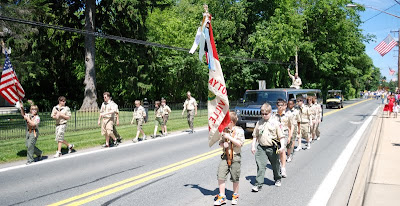 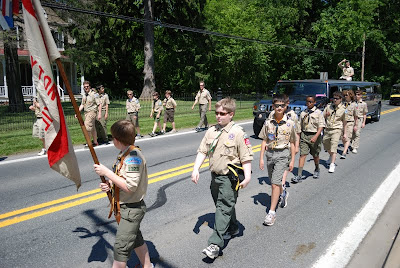 The whole day- capped off with a “fun run” and the annual Laytonsville Spring Festival, which I have been celebrating every year since I was in kindergarden- was a heart warming time and reminded me that no matter where life takes you, you can’t forget your roots, where you come from, and the people and places that make you who you are.
Juliana McKee
Labels: Juliana McKee Miss Teen International Miss Teen International 2010