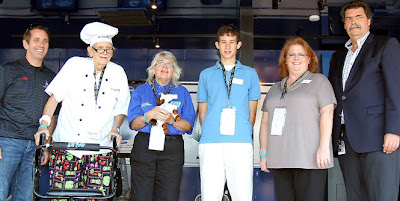 BJF Award Finalists Announced at Kansas Speedway
Bernstein, referred to as the "NASCAR boy" by his high-school librarian, spends his time outside the classroom volunteering with Autism Speaks. Completing an astounding 100 volunteer hours per month, Bernstein is involved in everything from tutoring and coaching to organizing and directing free summer tennis clinics for youth with autism. To encourage his peers to get involved within the St. Louis community, Bernstein and his sister launched a website to help recruit youth to volunteer on projects throughout the area. President Barack Obama recently recognized Bernstein's devotion to community service for young people in a back-to-school address at a local high school in Washington, D.C. 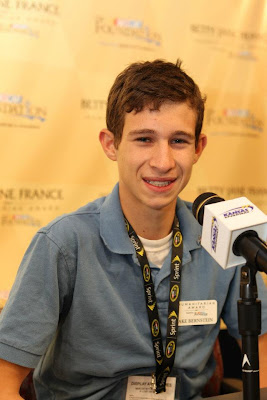 Jake Bernstein at the Press Conference at Kansas Speedway
VIEW VIDEO:  http://www.youtube.com/watch?v=0G6kzXkUaUk&feature=related
Aber has devoted the past 30 years of her life to serving others, with more than 1,700 total volunteer hours served. Most recently, Aber has focused her time and efforts on the Bridge of Books Foundation, an organization that shares the world and all its possibilities with at-risk children through books. Aber also attends a number of NASCAR races each year, where she spends her time volunteering with the NASCAR Foundation. 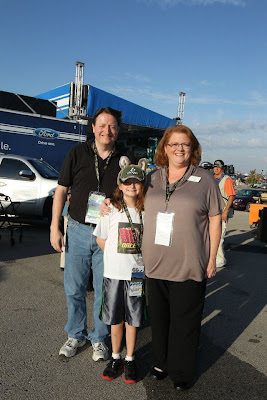 Patty Aber and her family at Kansas Speedway
VIEW VIDEO:  http://www.youtube.com/watch?v=hM-HG2sDjxw&feature=related
Doner contributes time to NASCAR charities such as the Victory Junction Gang Camp and the Martin Truex Jr. Foundation, in addition to working tirelessly for PBJ Connections, a non-profit organization she developed that provides emotional healing for at-risk youths with animal-assisted activities. Her innovative approach helps to improve self-esteem and foster healthy relationships with family and peers. 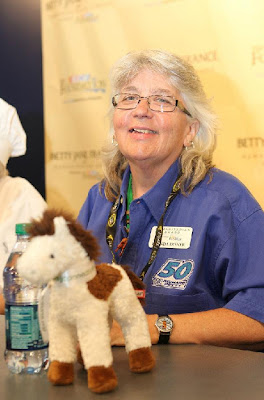 Brenda Doner at the Press Conference at Kansas Speedway
VIEW VIDEO: http://www.youtube.com/watch?v=jdY3-OUMSS8&feature=related
Weaver has been volunteering with the Alabama Institute for the Deaf and Blind Foundation (AIDB) for more than 50 years. In addition to his monthly charitable endeavors, he dedicates 30 hours a week to helping children in the organization. His many contributions range from creating intramural basketball teams and bowling programs to teaching students how to ride tricycles. Also a passionate NASCAR fan, Weaver once was able to pair his hobby and his volunteer work when his favorite driver, Darrell Waltrip, hosted the AIDB's annual fundraiser in 1986 -- thanks to a request from Weaver himself. 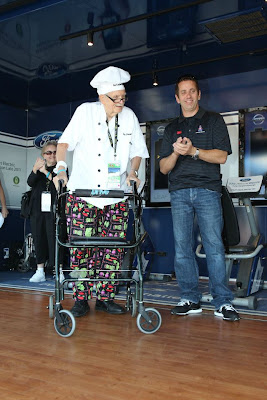 Robert Weaver at the Ford Stage with Greg Biffle at Kansas Speedway
VIEW VIDEO: http://www.youtube.com/watch?v=CVyZUNkdsVI&feature=related
Voting is under way and will run through midnight on Dec. 1 on NASCAR.COM. Betty Jane France will announce the winner during the Sprint Cup Series Awards Ceremony at the Wynn Las Vegas on Dec. 2 (SPEED and MRN Radio, 9 p.m. ET), culminating the Champion's Week celebration in Las Vegas.  All four finalists received expense-paid trips to Kansas Speedway last weekend. The winner of the inaugural Betty Jane France Humanitarian Award will receive an expense-paid trip to the 2011 Sprint Cup Series Champion's Week in Las Vegas, in addition to the Ford Explorer and $100,000 to donate. The other three finalists will receive a $25,000 donation from the NASCAR Foundation to a children's charity of their choice, as well as expense-paid trips to Las Vegas for Champion's Week. 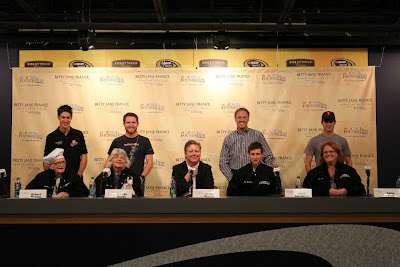 BJF Award Finalitss at the Press Conference with their favorite drivers
For more information about the NASCAR Foundation and the Betty Jane France Humanitarian Award, please visit NASCAR.COM/Unites.  Thank you in advance for taking the time to vote.  It will mean the world to these folks who have given so much of themselves to help others.  Thank you.
Janet Bolin
Labels: Janet Bolin Mrs. International Mrs. International 2011 The NASCAR Foundation