Inspiring the youth of today can be a challenge, but for one man it is his passion.  His leadership has turned the Philo Electrics into a winning team - something this school hasn’t seen in a while, and are fully embracing.  Most marketers could take a lesson from this guy too. 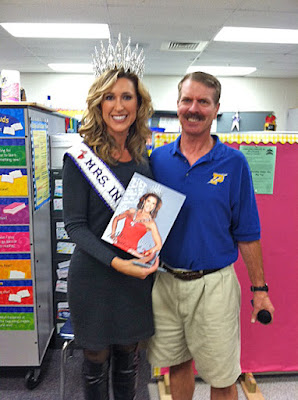 Dan Bell, Physical Education Teacher at DFE
SHARP is a program all the students are “in” until they break the rules.  SHARP stands for SAFE, HONEST,  AMBITIOUS,  RESPECTFUL and  POLITE.  And so far, it’s been very successful.
So, I arrive at the school, meet the assistant principal and get my script.  Oh yes, this isn’t some rinky dink production.  I’ve got cue cards and am walked through the entire production, thanks to Mrs. Stina McKendry who arranged my entire appearance. (Thank you, Stina!) 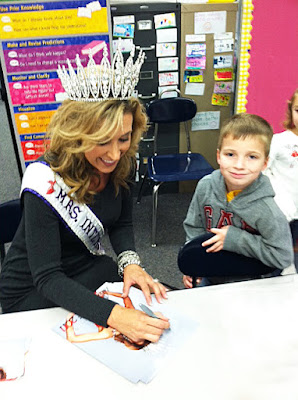 Aunt Janet with Luke McKendry
My role in the pep rally, as Mrs. International, was to support the SHARP program and commend the students who had the honor to be part of the pep rally.  (For those of you reading this, those students who fell out of the program were still in class and were missing out on the fun.)  Part of the entertainment was to officially declare the head football coach, “Mr. Football.”  I even had my own assistants, kindergarten students from Ms. Addy's room, who were going to “deliver” the Football King Crown and Mr. Football sash.
So, I watch the children line up along the hallway in anticipation for the “parade” of the entire football team and the band.  Amazing.  They were so adorable.  And, I think for some, they just loved the opportunity to be loud. 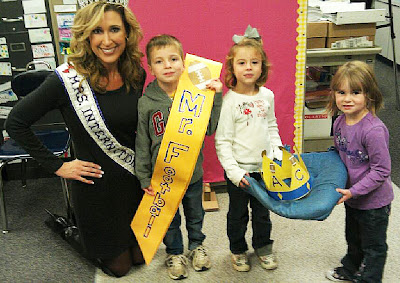 Kindergarden helpers from Ms. Addy's Room
So everyone funnels into the gym.  The coach introduces the Senior’s on the football team.  The assistant principal makes a few announcements, and then gets the children excited about their “special guest” who had traveled all the way to their school from North Carolina.  I completely forgot that little children can scream, on cue.  So, the build up for me to make my entrance was crazy loud.  Louder than being at a race track, and so incredibly fun! 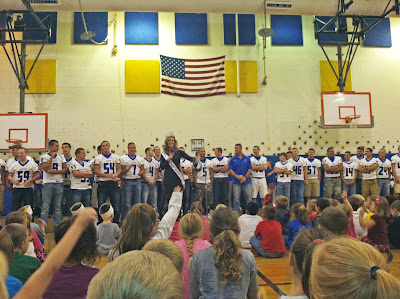 DFE Homecoming Pep Rally...before the surprise!
I walk to the center of the gym floor, take the microphone and continue with the script.  The best part is that this was a complete surprise for Coach Dirk Lincicome, also known as Coach L.  So, as I share with everyone that I am here to make it “official” that Coach L is “Mr. Football” my little helpers walk out with his Mr. Football sash and football crown on a pillow.  He was speechless, but very appreciative.  I was also able to bring along a little piece of NASCAR for the school to use as an incentive to keep the kids in the SHARP program – an autographed NASCAR Sprint Cup Series pit cap.  This school is also very special to me, personally, as my entire family graduated from Philo High School.  My uncle Bobby and uncle Tommy both were school teachers at Philo.  My mother was the Homecoming Queen and my grandpa was on the very first high school football team at this high school. 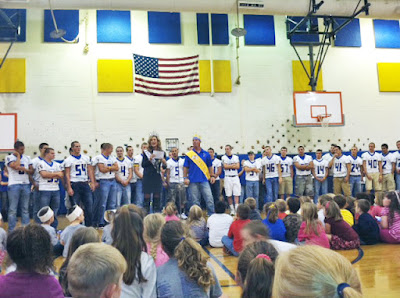 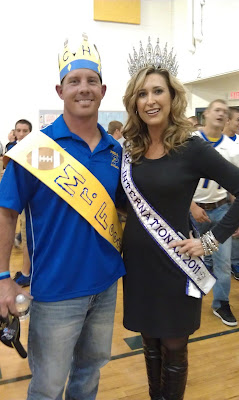 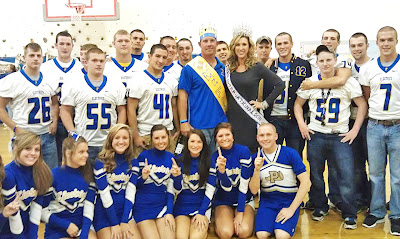 Philo High School Football
As my day concluded, I looked back and realized that whole day was one of my top-5 most impactful appearance days I have had as Mrs. International.  One I will always remember and look back on fondly.   Thank you to Mrs. Stina McKendry, Principal Rice, Assistant Principal Baker, Coach L and the entire teaching staff at Duncan Falls Elementary School for the opportunity to support SHARP and inspire your future leaders.
Janet Bolin
Labels: Janet Bolin Mrs. International Mrs. International 2011