I am not certain how most people feel, but from my perspective, I would rather be on the stage competing versus sitting in the audience of a pageant absolutely any day! As the recently crowned Mrs. International it was my privilege to support all of the lovely young women vying for the titles of Miss Teen International 2012 and Miss International 2012!

Kudos to those parents and loved ones filled with excitement and nerves, who hoot and howler, wave signs, and blow kisses as they watch the young woman whom they support take such a risk. Yes, I believe it is a risk to place oneself in a spotlight and allow yourself to be judged in such a public manner. Yet, we do it, because the return on investment can be so sweet!

Speaking of a return on investment, I would argue that having the crown placed on your head is not the only way in which to win a pageant. In my humble opinion, I have learned more from the pageants I have lost than those that I have won. It has been said that, “failure is not falling down, but refusing to get back up.”

As I watched these young women on stage during the pageant finals, I was bursting with pride for each contestant and their display of courage. That said, it is impossible not to make a special mention about the two fabulous young ladies with whom I shared a stage the night we were all crowned together in St. Cloud, Minnesota! Gabby and Krista both did an amazing job on the International stage, and together I believe we all did Minnesota proud! Included is a picture of the three of us at the Coronation Ball. 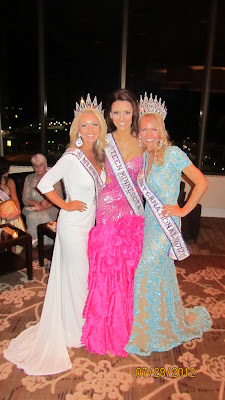 Looking forward, I could not be more thrilled for Krista Wanous and Caroline Crowley! These young women are going to make a difference in the world and I can’t wait to see it happen!

With love and admiration,