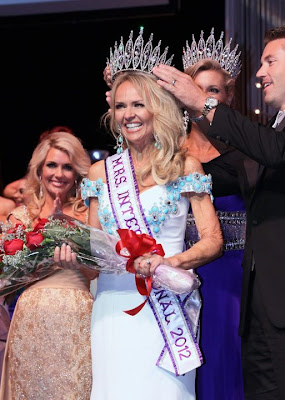 There are moments in our lives that not only stay with us forever, but they are so intense they transport us back to the experience in the blink of an eye. A first kiss, being pronounced husband and wife, and when your name is the last name called as a new titleholder, these are just a few of those precious moments.

My journey, to what is in my opinion the most beautiful and coveted crown, spans three decades and began when I was a teenage girl who took a chance and filled out the application for the Miss Teen of Minnesota pageant. There have been highs and lows, wins and losses, trials and triumphs, and most importantly love and friendships forged. I am not afraid to say that at 46 preparation took significantly more dedication and hard work than it did when I was younger. For those who question asking for help, I can only say that I am blessed and humbled to have a village of supporters who shared their encouragement and talent to help me become my best, for which I am filled with gratitude. My only regret is that I could not share the crowning moment with each of them by my side, but I hope they know they were each in my heart.

From the opening number, I have never felt so comfortable on a stage, as I knew I had done everything up until this point to the best of my ability. This year there would be a top 16 named and I was ready. My goal was to make the “cut,” however, I had so much respect for the other ladies participating I was willing to accept the decision of the judges. As the 13th name was called, I started preparing myself to exit stage left and to imagine myself in the balcony watching the top 16 compete for the on-stage interview with the satisfaction that I left no stone unturned. By now the 14th and 15th names had been called and I was in a good place. When they announced the 16th and final name, I heard Minnesota and threw my hands over my face with shock and appreciation.

As I presented my platform to the audience, I can only describe the feeling as both electric and intimate. It was my opportunity to share my story of survival in a spotlight center stage, and yet I felt like I was sharing a story one-on-one with a close friend. The interview question that followed was an opening that allowed me to further express my passion for connecting people and hopefully touching lives around the world.

When the curtains opened after intermission, the top 10 names were called. I was at peace and proud of myself for putting it all out there. Again, as the names were called I stood watching one exceptional woman after another take her position. When they finally got to finalist number 10 and I heard Minnesota again I felt complete elation!

As I led the ladies off stage right for the second time, we ran into the dressing rooms, where the Mrs. International Class of 2012 exemplified the best of sportsmanship and showed extreme grace by assisting in any way possible inclusive of hugs and kisses as we prepared for Fitness Wear and then Evening Gown. One of my favorite parts in the competition was sharing time on stage with Joe in his tux, while I was dressed in a custom designed gown by the gifted Gionni Straccia.

As Joe escorted me back stage, I realized this was it. I had just shared 30 years of pageant experience, a life time of adventures, and a story of burn survival…scars and all…willing to be judged.

The lovely women who individually and collectively represent the beauty of pageantry entered the stage wearing their stunning gowns with the top 10 lined up in the front waiting for the countdown. At this point, I can only rely on the wise words my husband shared with me two and a half years earlier when I told him I was considering competing in a pageant. He said, “If they are going to judge you on your scars, don’t do it. If they are going to see you the way I do, then go for it!”

I went for it. And, for the third time in two hours, my name was called last…as the new Mrs. International 2012!

With respect and love,