I was so inspired to read this article about a student from my alma mater – Osseo High School.  Senior Kevin Curwick, turns the table on bullying by using social media to spread message rather negativity.  Since we know cyber bullying is such a large issue for many young people, I knew it was important to share Kevin’s story with all of you.

After noticing negative messages about fellow Osseo students on Twitter, Curwick “decided to bring out the positives instead of the negatives in people” by creating @OsseoNiceThings, which highlights accomplishments, talents and positive attributes.

As a result Curwick has received national attention include an invitation for interviews with Ryan Seacrest, the Today Show and others.  Many people protest against bullying and say it needs to be stopped.  Curwick says, “But those are usually are just words.  A lot of time bullying is fraught with negatively and eventually you have to try something different.”  His Osseo Nice Things campaign has inspired many students across the nation to set up similar twitter accounts that are focused on highlighting the positives in people.  By the end of last week, he went from 120 followers to 2500.  I think I will join too!

There is always time to do the right the thing is proven by Curwick.  Even though he is finishing his final year in high school, serves as president of the National Honor roll student and captain of both the football and Nordic ski team, is a member of Junior Rotarians and rep at the North West Suburban Leadership Conference; Curwick still makes time to make a difference.  As pageant contestants, we all aspire to change our communities for the better. Curwick has certainly accomplished that.  If I was the director of a “Man-geant,” he would be my king! 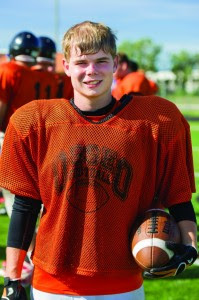 All kidding aside, I am so proud to be an Osseo alum and associated with such a mature young man.  I would like to challenge all of my readers and international pageant sisters to checkout @OsseoNiceThings or to start a similar campaign of positivity in your our community.