In addition to being in the midst of the hustle and bustle of the holidays, we are also in the midst of a very important and serious time: the 16 days of activism to say no to violence against women. From November 25th through December 10th many, including myself, have been wearing orange ribbons to spread awareness and build strength..

Violence against women has many forms including intimate partner violence (physical, emotional, and sexual abuse), trafficking, forced and early marriages, conflict-related sexual violence, among others. According to the World Health Organization 1 in 3 women will experience physical and/or sexual violence from an intimate partner at some point in her life. That number is simply unacceptable. We need to build each other up as women to have the strength and support to know that there is no excuse and they can get out of that situation.

On November 25th I joined United Hands of Hope House (a non-profit founded by Karen O’Hara – former Mrs. New York International that is working to build Western New York’s first safe house for victims of human trafficking) and Zonta International to kick off the 16 Days of Activism at the Peace Bridge which connects the US and Canada. On a day where windchill was in the single digits we bundled up, held our signs, and cheered as the bridge lit up orange to join our cause. 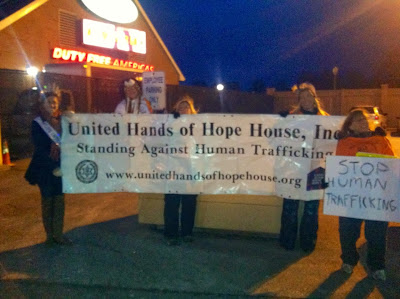 Chilly but speaking out to say no!

Please do your part to wear orange and say no to violence against women today!