A few weeks ago I traveled across the country to judge this Mrs., Miss, and Miss Teen North Dakota International Pageants in Fargo. It was both my first time judging and my first time in the “Peace Garden State”. I was worried when I saw the weather forecast predicting negative temperatures (and I’m not talking -1, I’m talking -17). However, I live in Buffalo, NY so I am a tough cookie with a thick winter hide. I also had to keep my trip a secret since no one could know that I would be on the panel. I had some fun presenting some cryptic clues to my Twitter followers as the time came closer and closer until I could actually reveal my destination. Clues included:

-I am neither in the eastern nor pacific time zones
-I am in the largest city of this particular state, but it’s not the capital
-This state has no professional sports teams
-A 1996 film of this city’s namesake about a homespun murder received 2 Oscars

Could YOU figure it out that it was Fargo, ND based on those?

I was blown away with the atmosphere and show that directors Kathy Yohe and Allison Harmon put together. As judges we had everything we could have needed and were treated royally. You could tell they made the contestants feel comfortable and had prepared them for the production.

Thank you to the ND International Pageant for inviting me and welcoming me so warmly (despite the temperature!) and congratulations to all the contestants for all their success and hard work. 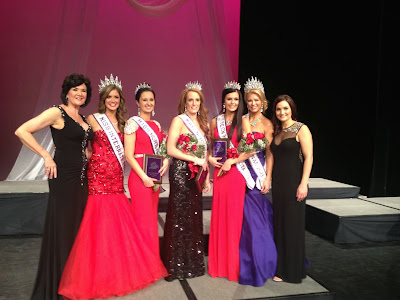