I had the opportunity to help raise nearly $10,000 for the American Heart Association’s Go Red For Women Campaign in Charlotte with their “Red Hot Purs-e-nality” auction.  Thousands from the region gathered for the annual Go Red For Women luncheon in early May.  Some of the purses were part of a silent auction, while others were offered in a live auction.

My contribution was an Officially Licensed NASCAR diaper bag, filled with bedazzled NASCAR ladies tees, tanks, onsie’s, jewelry and a few items for men.   There were 24 purses in total that were part of the celebrity auction.  With the success this year, I’m confident we’ll be able to make this an annual part of this luncheon.   Thank you to Fox Charlotte for your support and to all who attended and made generous donations. 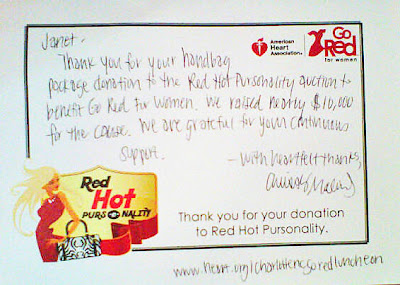