Legacy is defined as anything that is handed down from the past, as from an ancestor or predecessor.

With 2016 officially underway, have you thought about what kind of legacy you want to leave? Undoubtedly, we are all a year older, and of course wiser. We should absolutely be thinking about what we want our namesake to mean when we are gone. What will our legacy as a wife, mother, daughter, friend and yes, even title holder say about who we are as a person? Will others have a negative, positive or just a mediocre opinion of you? Will others, aside from your family, even remember who you are?

My grandmother, Gran, was one of the most special people in my life growing up. I talked to her every day on the phone and up until I was probably 25 saw her at least a few times a week. Even during my college days and early adulthood. When Justin and I moved to Utah after we were married, the once daily calls picked up to 3 times a day. Needless to say, we were extremely close and she knew me inside and out.

My grandfather, who served in the Navy, was gone during the earlier years of their marriage overseas. When he returned home, together they started multiple businesses and truly made a name for themselves in their small South Carolina town. My grandmother served on multiple boards and was a member of every woman’s league and charity organization around. Aside from serving her community and state, she also served at their church. She always said her real job was being a mother. The multiple businesses and organizations she was a part of stood no chance against her role of being a mother. She lived and breathed being the best mother and role model for her children.

The stories of trials and tribulations and how she overcame them are part of the life lessons that she passed along to me. The way she treated others and put the needs of others before the needs of herself will always stand out to me. She was a fighter and fought for what was right in all areas of life, including her own when she won the fight against breast cancer (double mastectomy in her 50’s) and then again when she was diagnosed with lung cancer in her late 70’s, after never smoking a cigarette in her life. She survived the rest of her years with part of her left lung removed.

This is the last picture I have with her. Justin, the boys and I came down to celebrate the boys birthday with her. She went to be with our Lord the next week. 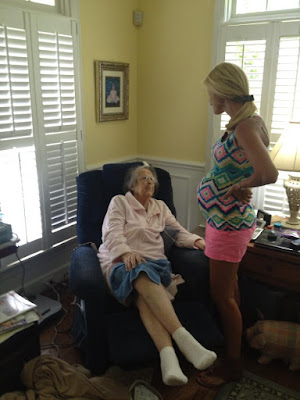 The legacy that I want to leave behind is one similar to my Gran’s. Devoted Wife, Loving Mother, Beloved Friend, Hard Worker, Activist, and Fighter.

Continue to expand your legacy so that your children and grandchildren will carry it on.

Until The Mission Is Complete,