When God Shows You Stuff is Just Stuff

I’ve just returned home from Washington, D.C. and to say it was a very busy and eventful trip would be an understatement. My mom and close friend from Texas traveled with me and I was so excited to be able to share the weekend with them and many of you! My wake up call that Friday came about 3 am so that I could get myself ready for my jam packed dayInse at the Pentagon and Walter Reed Hospital. Our flight was quick and easy, much different than my last flight with our 3 children. 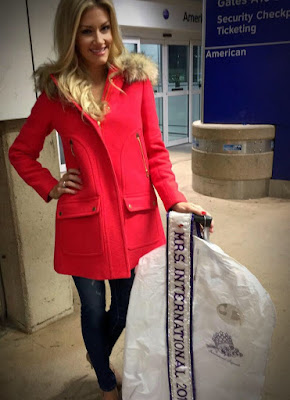 When we arrived at Raegan airport in D.C., we went to baggage claim only to find out that my bag wasn’t there. The airline had checked it in, but they told me they must have misplaced it. With appointments back to back, I didn’t have time to wait long to see if they could find it so off we went. They assured me they would find it and I would more than likely have my bag delivered to our hotel by the afternoon. I didn’t need anything for Friday as I was already ready, but for the rest of our trip I had nothing. Not even flats with me. Luckily, I had a very generous pageant sister, Mrs. Deana Linz, that was touring me around. She came armed with Clay Spann makeup and lots of dresses, even a sock bun in case I wanted to put my hair up! Thanks again, sweet friend!

Friday evening begins to approach and around 8 pm I made my, probably, 10th call to the lost baggage office to be told that they believe my luggage was stolen. Insert slight, okay major, panic. There was LOTS of valuable stuff packed neatly away in my bag, including all of my precious Clay Spann makeup, which I was most upset about.

Saturday appointments included a tour of the White House and lots of walking around to the memorials and monuments. I didn’t have a chance until midafternoon to head back to the airport to fill out a police report. Ya’ll! The police were amazing. They quickly began pulling video surveillance and we finally saw the gentleman take my bag straight off the baggage claim and walk out the door. The best, and hardest part to see, was when my mom, friend and I slowed down so that he could walk right in front of us out the door…. Pulling my bag behind him. You can’t beat southern hospitality, right?

We (yes, I was able to watch all of the behind the scenes investigation going on) tracked him getting off of the metro, ride the escalator down to baggage claim and take my bag. He was trying to blend in as a traveler and had other bags with him. At this point, I knew I would never see my things again and I was so upset about it. Just knowing all of the things (and money) I would have to fork out to replace it all was devastating.

Then, it hit me. It was just stuff. Replaceable stuff. Nothing of sentimental value, like my grandmothers jewelry or diamond earrings. After that, I realized another thing. What if I had noticed the guy pulling my luggage and happened to say, “hey, that’s mine.” Would he had been apologetic and given me my bag or would he have pulled a gun on me? A million things were going through my mind, but one thing I realized was that as much of a pain it was to not have my belongings, I would survive and get by with what I was loaned or was able to borrow. I stopped stressing about it Saturday night.

Sunday morning while we were walking around the beautiful streets of Georgetown, I received a call from the police saying they had my luggage! I asked if they were joking! The guy had returned Sunday morning to steal another bag and the lieutenant that had helped with the video surveillance noticed him and walked right up to him! He actually confessed to stealing my bag and took the police back to his hotel room where he had quite the set up of stolen things. He was only 26! 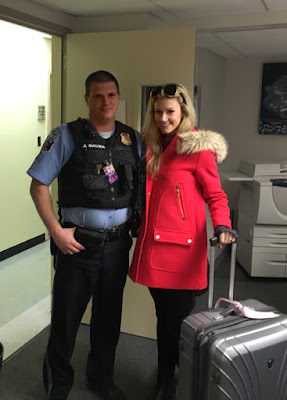 I had EVERYTHING returned to me. Everything had been gone through, which creeped me out, but my stuff was back. I definitely think that God wanted to show me that I don’t need as much stuff in my life and not to worry because HE will always provide for me.

I am so thankful for the D.C. police and how attentive they were in making sure my belongings were returned to me.