When James "Rambo" Smith (aka The Singing Fireman) invited me to make a guest appearance at a charity football game in North Carolina between the Wilson Ruff Ryders and the Carolina Rams semi-pro football teams and shared with me the money raised at this particular game would benefit both the UNC Burn Center and the Ronald McDonald House Chapel Hill, I did not hesitate to accept. The appearance turned out to be a weekend filled with wonderful opportunities to meet some truly gracious people.

We started on Saturday morning with a tour of the Contentnea Fire Department in Wilson, North Carolina. This is the station where James serves as a firefighter, and it was a pleasure to meet the men who help to protect this charming community. 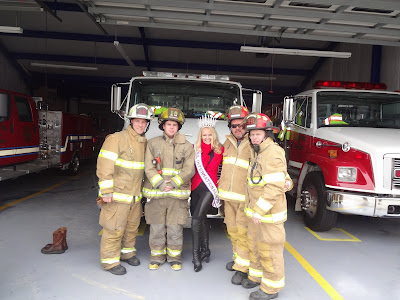 With members of the Contentnea Fire Department 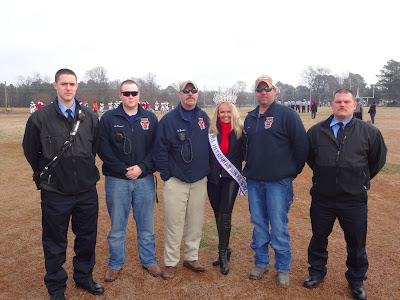 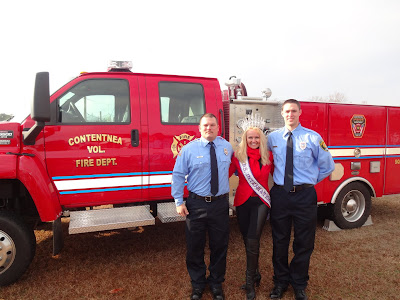 As soon as we arrived I was brought out to center field during warm-ups to address both teams. For those of you who do not know my background, I have coached power skating for men's hockey teams from Mites through College and beyond for years, therefore, addressing these athletes felt like a being on home turf. I shared with the players the correlation between their commitment to charity and the commitment of the International Pageant participants. Though I intentionally wore the colors of the team that invited me to the game, I made certain all the players knew that there is nothing more fun than watching a good football game, and as a former football cheer captain I was sincerely looking forward to the afternoon!

Following the National Anthem sung by The Singing Fireman, I again found myself in center field as I was asked to toss the coin for kick-off position. My final responsibility for the afternoon was the presentation of the trophy. Thankfully many of the guys took a knee, but once I handed off the hardware, it was hilarious as I was swallowed up in a sea of shoulder pads and grass stained uniforms. If you look really close, you might be able to find the crown! 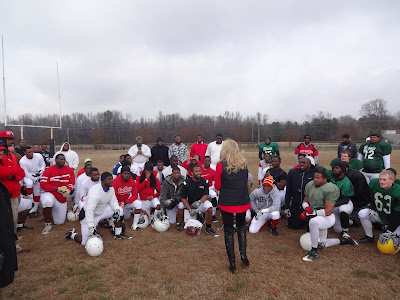 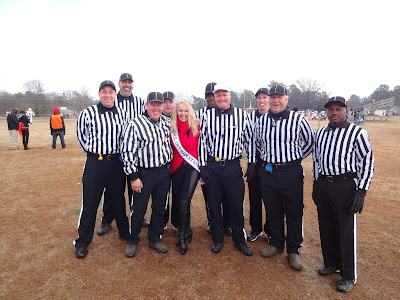 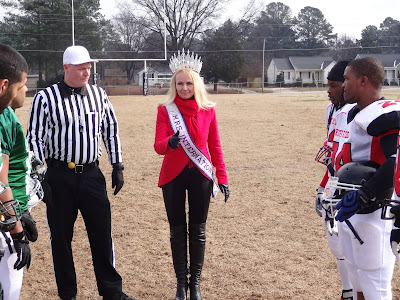 Coin toss...tails and the Rams receive! 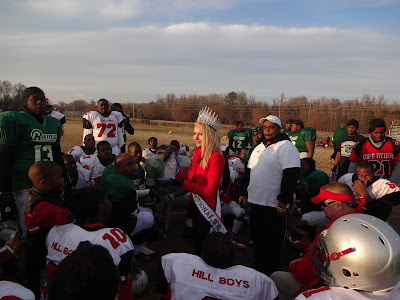 Presentation of the game trophy. 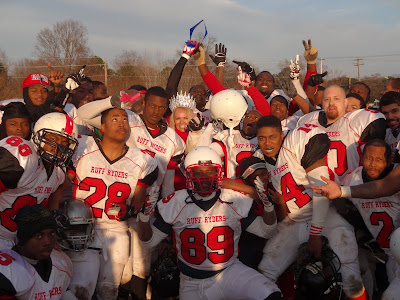 During the game I was kept busy with fans including; two burn survivors who shared their personal stories with me, the Wilson County EMS stopped by, the Jaycees were represented, I addressed the crowd during half-time, also posed for photos and signed autograph cards. 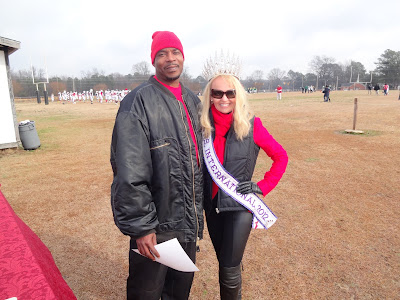 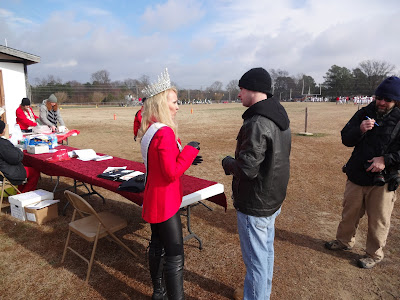 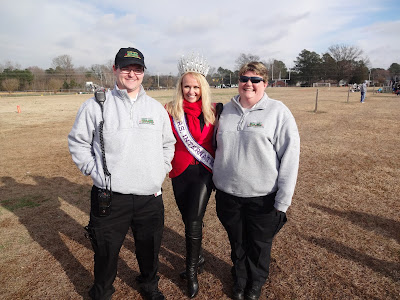 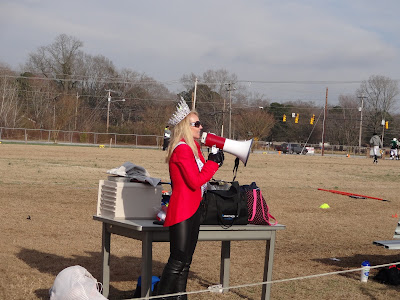 Who doesn't love a megaphone... 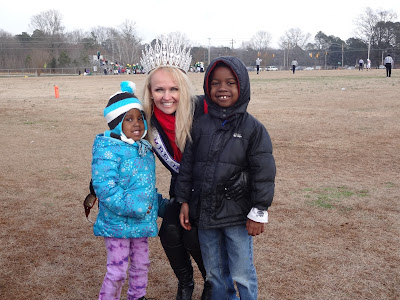 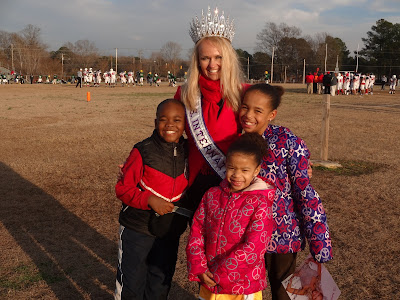 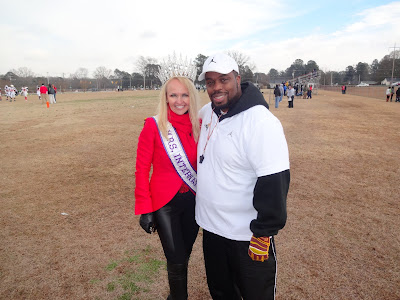 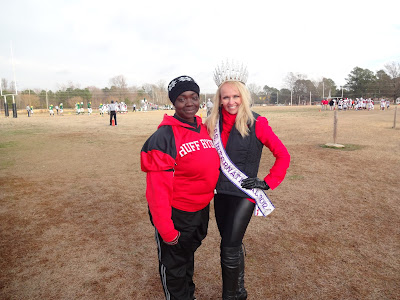 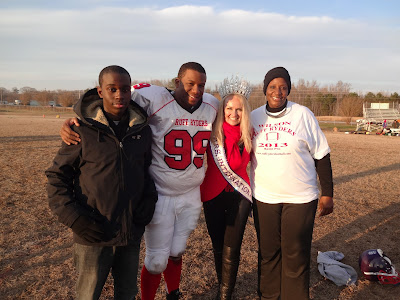 Ruff Ryder, his brother and mother who delivered the pre-game prayer.

From Wilson we traveled to Chapel Hill, where we were able to score a table at the extremely popular Top of the Hill Restaurant and Brewery, which happens to be in part owned by James January, another burn survivor...it helps to call ahead and ask one of the owners to dine with you. Once we arrived, January and his friend Peter waved us over and we enjoyed some really good food on the covered and heated roof top patio that overlooks the heart of Chapel Hill. 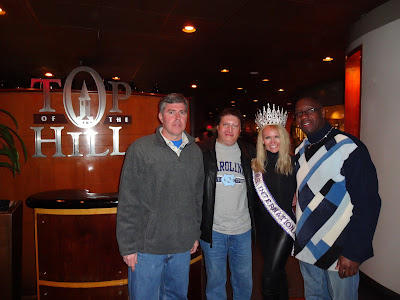 Peter, James, me, and James

The next day we started in Raleigh with a visit to Fire Station #1 and I witnessed my first live firefighter sliding down the fire pole in action. The Chief was gracious enough to share some time with me and several of the firefighters joined James and me as we walked across the street to visit the Fallen Firefighters Memorial. 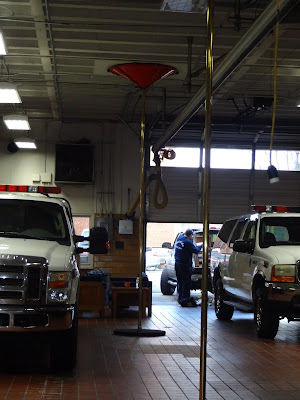 I wasn't quick enough to capture the blue flash coming down the fire pole for a call, but captured the pole! 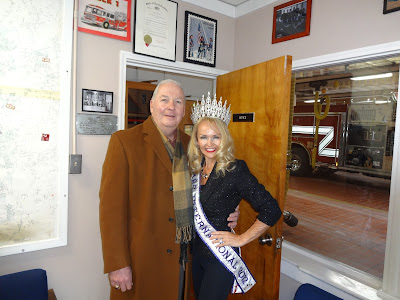 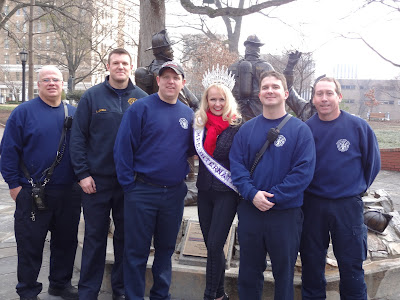 Firemen with me at the NC Fallen Firefighters Memorial.

It was time to return to Chapel Hill to tour the Jaycee Burn Center at UNC and Ronald McDonald House. First, we met with the coaches and players in the lobby; presented a donation to the burn center, and then we were guided through our tour by Ernest Grant. It was also nice to be joined by Anthony, who happens to be the son of the Carolina Rams coach, and he is a burn survivor who was cared for at UNC.

We had a chance to see the entire facility, which will soon have a total of 40 beds available. As we met burn care staff and patients, the players were able to ask questions and they even shared an autographed jersey with one special young lady. She was excited about the jersey, but went bananas for my crown! 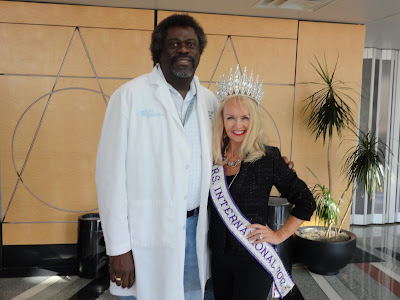 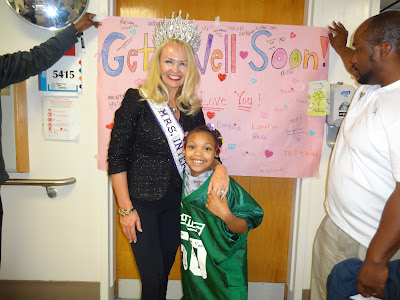 A burn survivor who could not get enough of my bling! 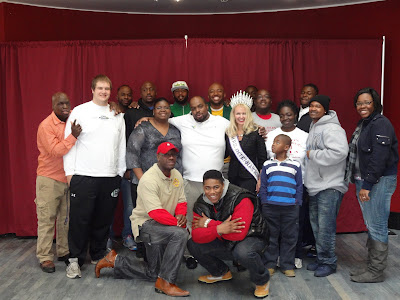 The team members, coaches, owners, and staff who presented the donation and participated in our tour.

Our final stop was at the Ronald McDonald House. We were given a tour by the weekend house manager, Stacey. This particular house was one that provided a home for Coach, while Anthony was in the burn center. Stacey was presented with gifts for the families and a donation by both teams. While we toured the house one special little girl asked to have her picture taken with me. I signed a head shot for her and gladly smiled with her. What a beautiful way to wrap up my time in North Carolina. 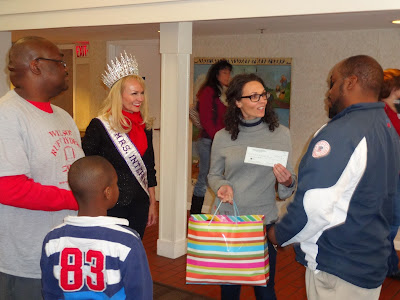 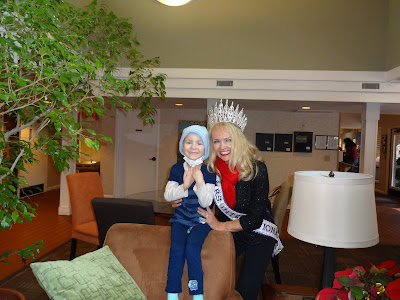 Was a treat to take a picture with this lovely young lady!