During the match up between the Wilson Ruff Ryders and the Carolina Rams, I had the good fortune to meet Gray Whitley, who was sent to cover my appearance with his camera for The Wilson Times. My interview was conducted by Janet Conner-Knox, and she was joined by her son Sherrod. Janet shared the final story with me, and I would like to share it with you.

Before I do, just hours after the papers hit the news stand, I was contacted by a Wilson resident, who happens to be a burn survivor and was moved by the story. How cool is that! 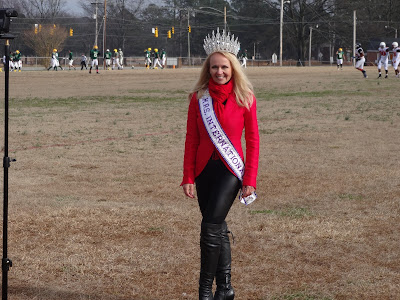 As Gray was taking photos for the article. 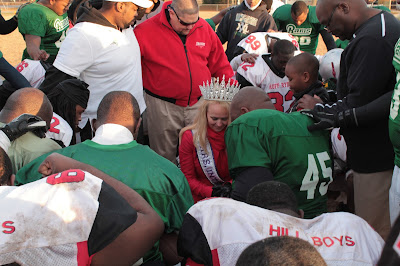 As the teams shared a word with the Lord.

Beauty queen recovering from tragic accident inspires others to fight

Sarah Bazey, the reigning Mrs. International 2012, is small in stature. But don’t let her size fool you.

She’s fought quite a battle to overcome third-degree burns on over 40 percent of her body and regain her life as a business woman. And with scars she would not hide, she decided to compete in a beauty pageant. As her crown shows, she has won many battles and the war.
Bazey, who travels around the world encouraging other burn victims, was invited to Wilson by the Ruff Ryders football team. Saturday was the Ruff Ryders first game of the season held at Toisnot Middle School’s field. The Ruff Ryders are a semi-professional football team whose base is Wilson. This is their second season.

Terry McGuire, who owns the team with her husband, Bobby, said the team gives young men who are out of high school and are athletic an avenue to continue in sports. McGuire said the team is a part of a league that will have them at a football combine next month.
“That will give them a chance to be in front of NFL scouts, international scouts,” McGuire said. “They will have a chance to be seen, even if they aren’t chosen.”

The other focus the McGuires have is to make their games a platform for organizations that help others.

“There are a lot of causes that don’t get the focus that they need,” McGuire said. “We figure the Ruff Ryders games can be an avenue. So every game we do from here on out will be supporting a cause.”

This month’s game was dedicated to burn survivors.

THE ORDEAL
Bazey, 46, said she was burned when a helicopter she was flying in crashed and burned.
“Before I was burned in 1994, I had a vague awareness of what burns are,” Bazey said. “I had been sun burned. I had maybe some hot water spilled on my hand. I’ve grabbed a cookie sheet, so I knew that and I knew it was painful. I had no clue what the world of severe burn really is.”

Bazey said most people have experienced a first-degree burn or second- degree where their may be some blistering and exposed nerve endings, which is very painful. “A third-degree burn goes down epidermis and dermis and you no longer have a hair follicle, a pore, the nerve is burned and you’re burned so deeply that the skin is essentially not able to re-heal and grow back in that area,” Bazey said as she showed her left hand that had a third-degree burn. “So my skin was burned off.”

She said doctors took skin from her ankles to her hips and they took skin off her scalp. They used that skin to repair the burned portions of her body, she said. Once you have donated your own skin, Bazey said, they put a medicated gauze over it and staple it to you. She said she had thousands of staples.

Bazey said as you heal, you are put in a tub of water as part of the therapy. “It can only be described as a torture chamber,” Bazey said. “A tub room is a room with a stainless steel tub with a whirl pool effect of water stirring. In my case they lowered me into the tub. What they do in that room is remove dead tissue by any means they need to remove it.”

Bazey said although she had five narcotics flowing through her body, it didn’t matter because the pain was still so great. “They were giving me amnesia drugs and they had no effect,” Bazey recalls. “I remember every excruciating moment.”

SURVIVING MEANS
Bazey serves on the The Phoenix Society of the World Burn Congress and they help those who have been burned. She said the hope is that all those who are burned become survivors.

“Being a survivor with a burn means learning how to get back to living,” Bazey said. “It means learning how to walk amongst people and not be so self conscious. You’re afraid people are going to stare. It affects every part of your life - your personal, intimate and social life.”
Bazey said for some people the incident that caused the burn is something with which they wrestle.

“Now, I don’t put survivor on the top of my list,” Bazey said. “I will tell you I am a wife, a business person. I’m Mrs. International. I am a friend, a daughter and a sister. I certainly am a survivor, but it’s not on my mind every second of the day like it was years ago.”

THE PAGEANT
Bazey said entering the Mrs. International contest and winning was another step in surviving her injuries.

“This pageant has really done something for me that I never dreamed and hadn’t anticipated,” Bazey said. “I spent most of those 18 years covering up my scars. Every day I’d pick out my clothes and do whatever I could to hide my scars.”

Bazey had been in pageants 30 years ago. She had been crowned Miss Teen Minnesota. She had also competed in the Miss America Pageant. “But as a burn survivor I never thought I would go back on the stage — never in a million years,” Bazey said.

Two years ago, some friends encouraged her to consider Mrs. International. So she said she talked to her husband and her immediate family and decided if she would compete, she would not hide her scars.

“I didn’t want to choose my gown because it covers every inch of me,” Bazey said. “And so I wanted to forget about my scars and just go and compete.” Bazey said it was the most empowering and liberating thing for her. “I tell people I love this pageant system because it’s 50 percent based on the interview, 25 percent physical fitness and 25 percent evening gown,” Bazey said smiling. “This is the only pageant for married women and your husband escorts you on stage in a tux. And he crowned me.”

After winning Mrs. Minneapolis, she competed in Chicago last July with women from all over the world: South Africa, Russia, The Philippines, Malaysia, Australia to name a few countries.
“I was not the prettiest or the skinniest. But I think my story is what the judges heard and connected with,” Bazey said. “My crown is very blingy. It is a blessing and an honor. Those are probably the two best words to describe this as. I am the 25th woman in the world to have this honor. It’s huge.”

Bazey has just been to Tokyo, Hong Kong, Manila, the island of Boracay, Australia, Honolulu, visiting and touring burn centers, nursing homes and talking to people who are, hopefully, going to be survivors.

She said she had just unpacked her bags after three weeks on the road, did loads of laundry and then flew to Raleigh to come to Wilson. She will head to Alabama then New York to emcee an event to turn Broadway red for the American Heart Association and then head to Vegas. She will also go on a European tour in May.

When Bazey’s reign is over, she said she’ll go back to her company selling steel and concrete which she has done for 25 years. She started the company when she was in college. Most recently, she graduated from Harvard’s business school in 2003.

But right now, she’s enjoying the crown. “I am having the time of my life,” Bazey said.

Thank you to Gray, Janet, and Sherrod, it was a pleasure meeting each of you!