My apologies in advance as this will be a lengthy blog, however, it was a long day packed with precious memories. I hope to share with those of you taking your time to read my words, at least a taste of the unforgettable day Joe and I experienced in Tokyo, Japan! Speaking of taste, let me start by sharing with you a photo of my breakfast plate; colorful, sweet fruit & vegetables with incredible flavor, crispy bacon, cheeses, pastry, fresh squeezed orange juice and a cafe au lait! For those who may know my husband, rest assured that Joe's plate was filled with his favorites; eggs, bacon, potatoes and toast. 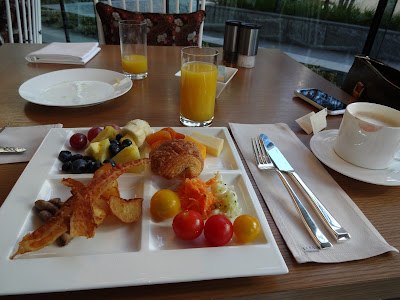 Next we were joined in the lobby of our hotel by my Harvard Business School classmate Mr. Morimasa Sato, his beautiful wife Hidemi, and their lovely daughter Tomomi. The entire day was hosted by the SATOs and it was simply spectacular!

Our first stop was Asakusa (old downtown Tokyo) where we walked through the marketplace toward the Sensouji (Asakusa Kannon temple). Once we reached the temple area, we found ourselves in a line that moved slowly up the stairs to the spiritual tradition of tossing coins into a box, placing your hands in prayer, and making a wish for the new year. Before tossing my coin, I noticed a Buddhist priest beyond the very large box. He was kneeling at a very elaborate and traditional altar as some individuals sat near him appearing to be in prayer or contemplation. After making our wishes, we were pushed and shoved toward the side exits from the temple by a sea of people who were void of any personal space, as they were moving like waves toward the spiritual box. 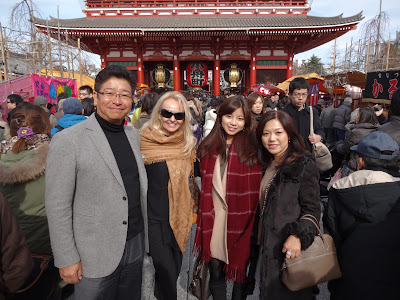 In front of the temple. 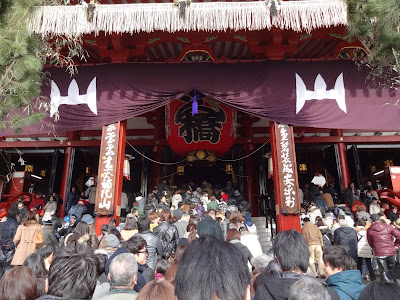 The stairs leading into the temple. 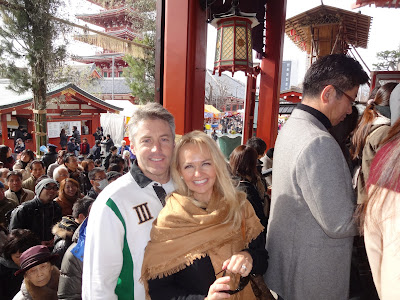 Joe and me just before entering to make our wishes. 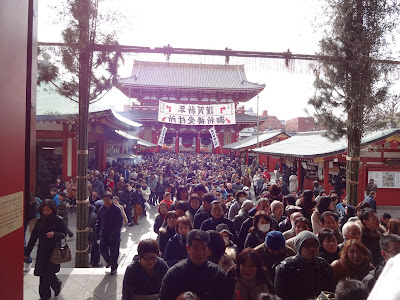 Looking behind us at the never-ending line.

Because this is a very important and celebratory time of year in Japan,the Japanese people spend seven days in honor of the new year. Mori, Emi and Tomomi purchased items that are symbolic of various forms of luck or protection, and Joe and I each paid 100 Yen (approximately one dollar) for a shake at good fortune! Mori ensured we take home keepsakes from our time in Tokyo, and who knew red beans in a pastry shaped like a bird could be so sweet! There were many more interesting food options and in all cases it is impossible not to notice the color, the textures and the presentation. 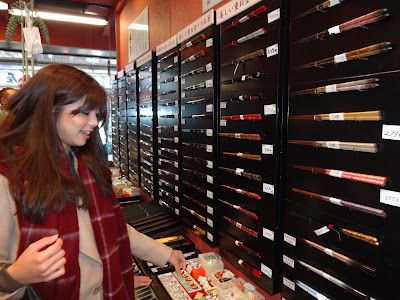 Tomomi helping us select two traditionally carved chopsticks to take home as a gift from our hosts. 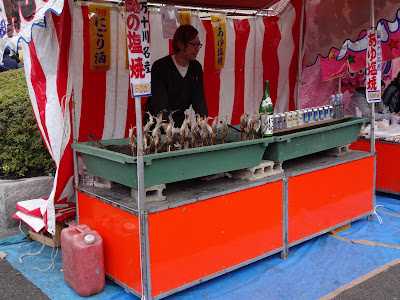 Fish on a stick. 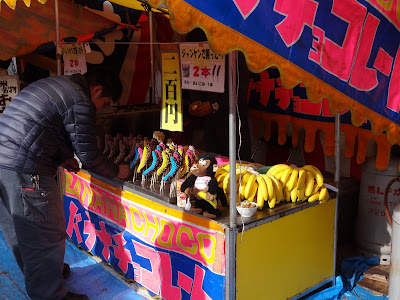 Chocolate covered banana on a stick. 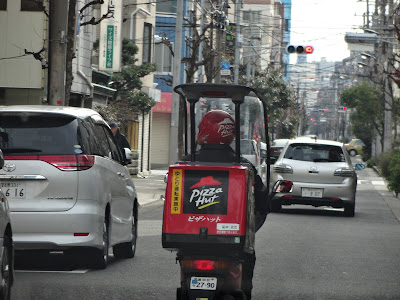 A taste of home!

From the old town with traditional architecture, Mori's driver drove us through various neighborhoods, until we reached Shiseido the Ginza, which is a famous building in the Ginza district, which is the Tokyo version of New York's 5th Avenue. The wide street and sidewalks were filled with only pedestrians on this Sunday, as people dinned and shopped in the most beautiful and upscale area Tokyo has to offer. During our time in Ginza we accomplished two very important activities; we enjoyed a delicious treat in Salon de Cafe and we took the escalator in a very impressive department store down to an underground market, where Mori shared with us an example of his company's product. First, the cafe was unlike anything I have ever seen before...let's just say that there was real gold on the top of my strawberry parfait, which was edible...and tasted wonderful with the berry and a little whip cream! Second, it was fun to see the actual product Mori's company produces, including a wide variety of trays on which food is packaged and displayed. 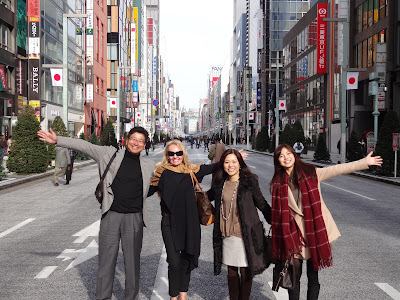 Mori, me, Emi and Tomomi in Ginza. 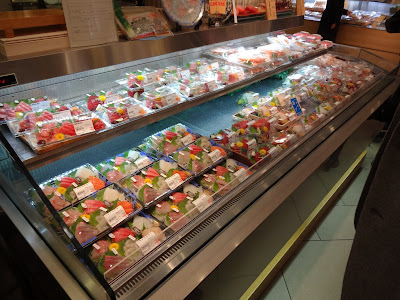 Trays displaying sushi in the colorful and vibrant market.

Now it was time to see the city from a new perspective, so we boarded the Floating Lounge called the Hotaluna on the Sumida River and set sail for a fantastic view of the city. The vessel itself is a highly contemporary all glass encased ship allowing for complete access to nearly 360 views. From the embarkation pier we had a fabulous view of both the Tokyo Sky-Tree Tower and a creative building that is home to a beer company. The building designs in this city are of enormous contrast between the old Japanese traditional structures nestled between volumes of modern and bold structures. 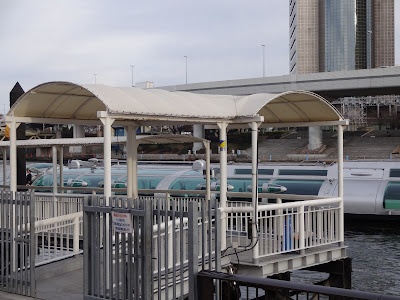 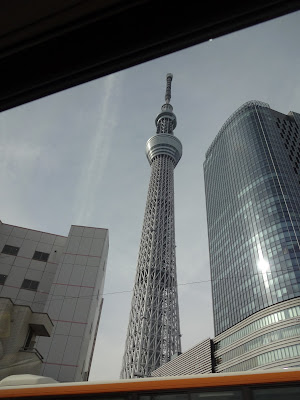 Following our cruise, we were taken to a Toufuya Ukai, which is near the base of the Tokyo Tower. This is a truly authentic Japanese restaurant, and it was the icing on the cake to experience all of the richness of this culture in this historic place. As we climbed the slabs of stone leading up to the entrance we captured a photo with the Tokyo Tower soaring above us. Once inside, we were serenaded by the sounds of a woman wearing a kimono playing the Koto. Walking thru the long and narrow halls, Joe often had to duck to get through the doorways. Before entering our private dinning space we removed our shoes and walked up two steps and onto a mat. We were seated on a pillow on the floor, but had both a backrest and space beneath the table to lower our legs. The traditional kneeling would have been a challenge, and we were most grateful for the newer seating arrangement. The meal included nine courses and was an adventure in and of itself for a couple from Minnesota. My favorite new food of the evening was the bamboo root. As we finished with honey over oranges and tea, we were again serenaded by three picturesque Japanese women playing and singing a 200 year old song. 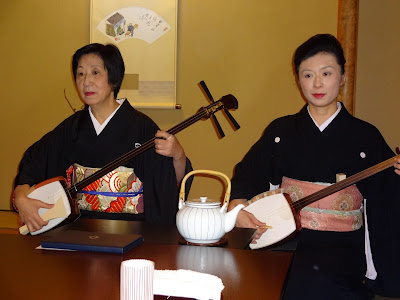 Beautiful kimono and lovely sound from the Koto. 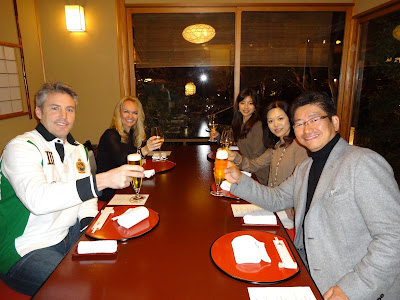 Dinner with the Sato family. 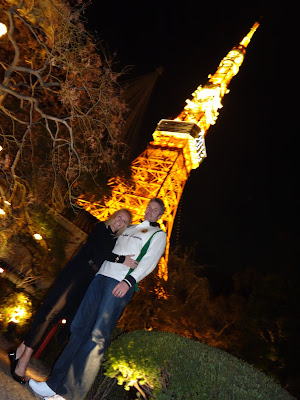 As we walked through the gardens after dinner, we captured one last photo of the evening with the bright Tokyo Tower displaying 2013! What a way to being a new year...thank you for taking this journey with me.