The Traditions of Tokyo

As I write this blog on our Delta flight bound for Hong Kong, I can't help but smile...because I am reflecting on yet another lovely day in the city of Tokyo. This is a part of the world that neither Joe or I had ever visited, and we both agree this is a place to which we will return.

From the time we arrived I was captivated by the elegance, cleanliness, attention to detail and design, graciousness, and respectful behavior that seemed to embody every single aspect of the Japanese culture. Even when we walked out of the airport and stood waiting for our driver, I noticed the formality of the clothing on the drivers; including scarves on the ladies, dark suits, and white gloves on both the men and women. The cars were immaculate both inside and out, heads bow in acknowledgment of both friend and stranger, hot towels are presented prior to a meal, and shoes are removed before stepping onto a traditional floor mat.

On our final day, Mr. Sato arranged for us to be hosted by Mr. Shinya Ogawa. But, prior to our departure from the fabulous Palace Hotel Tokyo, Joe and I were treated like royalty and sincerely appreciated the attentive staff and General Manager, Mr. Masaru Watanabe. 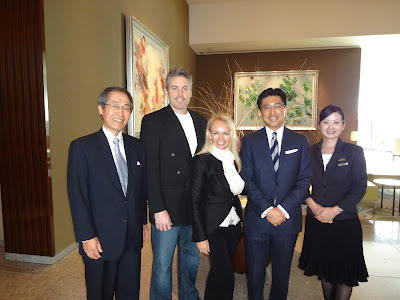 From the hotel we drove to Meiji Jingu and walked along a wide path in the forest to the Shinto shrine. Before we entered the temple we washed our hands, which has a ritual in and of itself. As we moved in line toward the altar, we again prepared to toss a coin, but today we followed a more formal tradition of making the toss, bowing twice, clapping twice, hands in prayer and a deeper bow. 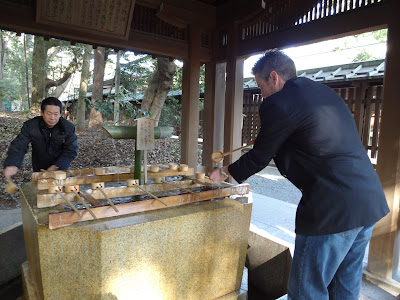 Joe washing his hands before entrance to the temple. 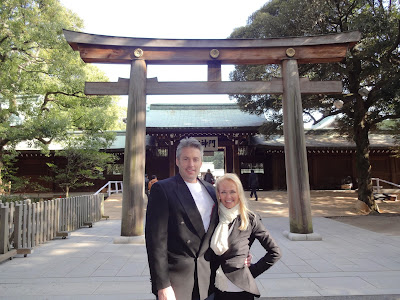 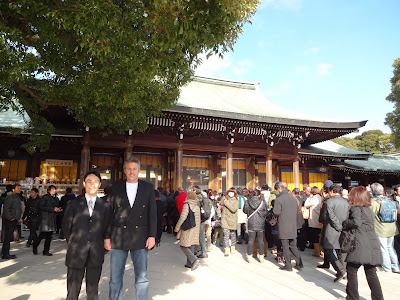 Shinya and Joe after tossing the coins.

Mr. Ogawa gave us a tour around the temple area and when he explained the meaning of the wall with prayers and wishes written on wooden blocks, I decided there was a message I really wanted to leave as Mrs. International 2012. 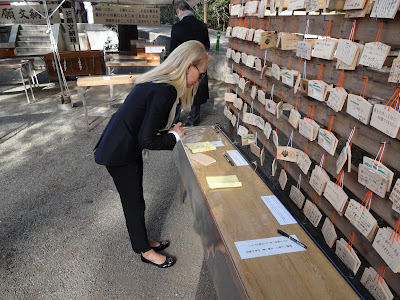 Writing and sharing my message to the Japanese people. 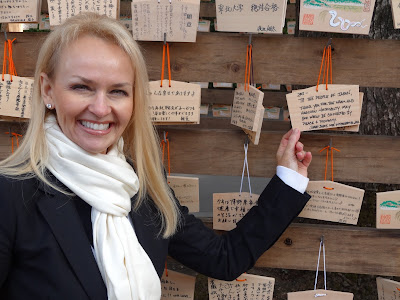 We then enjoyed a lovely lunch together and headed in the direction of the airport. Thank you to everyone for a lovely experience in Tokyo!