“Ma’am, Your plane is leaving right now. We will have to put you on a different flight.”

It was 5 in the morning and I was standing in the airport now wide eyed at the fact my plan to Guatemala was leaving. The next flight out turned out to be the next day, which was unexpected, but turns out a lot of people from all over the US were traveling to Guatemala at that moment. By way of simple human error I mixed up my flight time with boarding time. An overwhelming amount of peace washed over me though as I was leaving the airport driving home to depart one day later.

I simply believe everything happens for a reason. The last time I missed a flight, that one on my original itinerary was stranded in Chicago for 2 days because of weather. If I had actually made it, I’d be stuck with thousands of other travelers. Because of again, simple human error, I had to take another flight and made it back to Omaha even earlier than my original flight. I was meant to miss that flight.

Fast Forward to Guatemala 2015 with Soles4Souls, arriving one day later. Upon arrival to our destination in Chiqumala (pronounced Chic-e-moola) since we missed one day, we started connecting with other locations we could distribute to in Guatemala. One of those turned out to be a hospital in Antigua.

The Soles4Souls Guatemala trip was my 5th International shoe distribution trip with Soles4Souls and Haiti has by far been my favorite because the need there is so great. But something happened in Guatemala that I am still sorting through my mind and heart.

The hospital in Antigua primarily serves people with special needs. Many of them abandoned, all ages, most bound to a wheelchair or bed for the rest of their life. After delivering the shoes, we toured the hospital and each age/gender group as they are all separated. Medial teams fly in each week from around the world to help serve this hospital. Even with the help of the medial teams, the hospital is grossly understaffed with one person for every 5 to 8 people. A normal ratio is 1 staff to 2 people. We were limited on the photos we could take in the facility, but what I was saw just rocked me to the core, so much love was missing from the lives of the patients. The hospital was nice for a foreign country and they were absolutely doing the best they could with the resources available to them with only 20% of their funding coming from the government. To help make their program better for patients, nurses also clean, cook, do laundry, you name it. 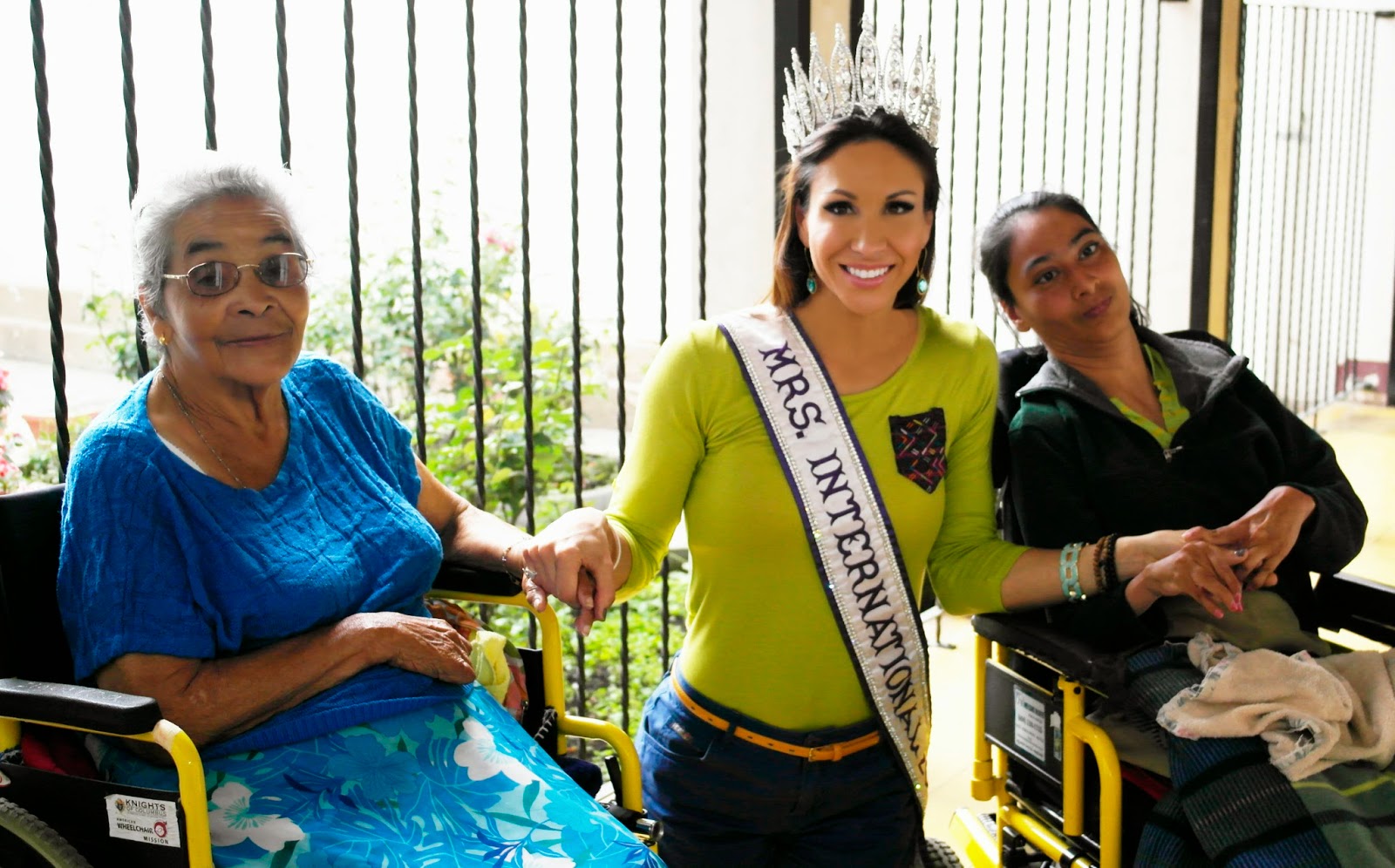 Rosalinda (on the left) has been in the hospitals care for 15 years, Wendy for 25 years.

We walked in to the children’s room. Many deemed nearly vegetables and largely unresponsive to the world around them. I put my hand on the first little girl as she lay in her “crib” and saw a smile go across her face. Child by child, each responded to my touch as I held their hands or laid my hand on their hearts. Each heart beating just as strong as any of us, full of life. Some responded with a smile, or grasped my hand. Walking through the room seeing each child I could not hold back the tears anymore. One young man Bryon held on to my hand so tight and would not let me go. The rest of the group continued the tour and I stayed with him. Finally a point came I had to leave and as his fingers slipped away from my mine, I haven’t stopped thinking about him since. Those kids were each responding, in need of much love, but by no fault of their own will likely spend the rest of their days in a large crib staring at block walls unaware of time or what day it is. 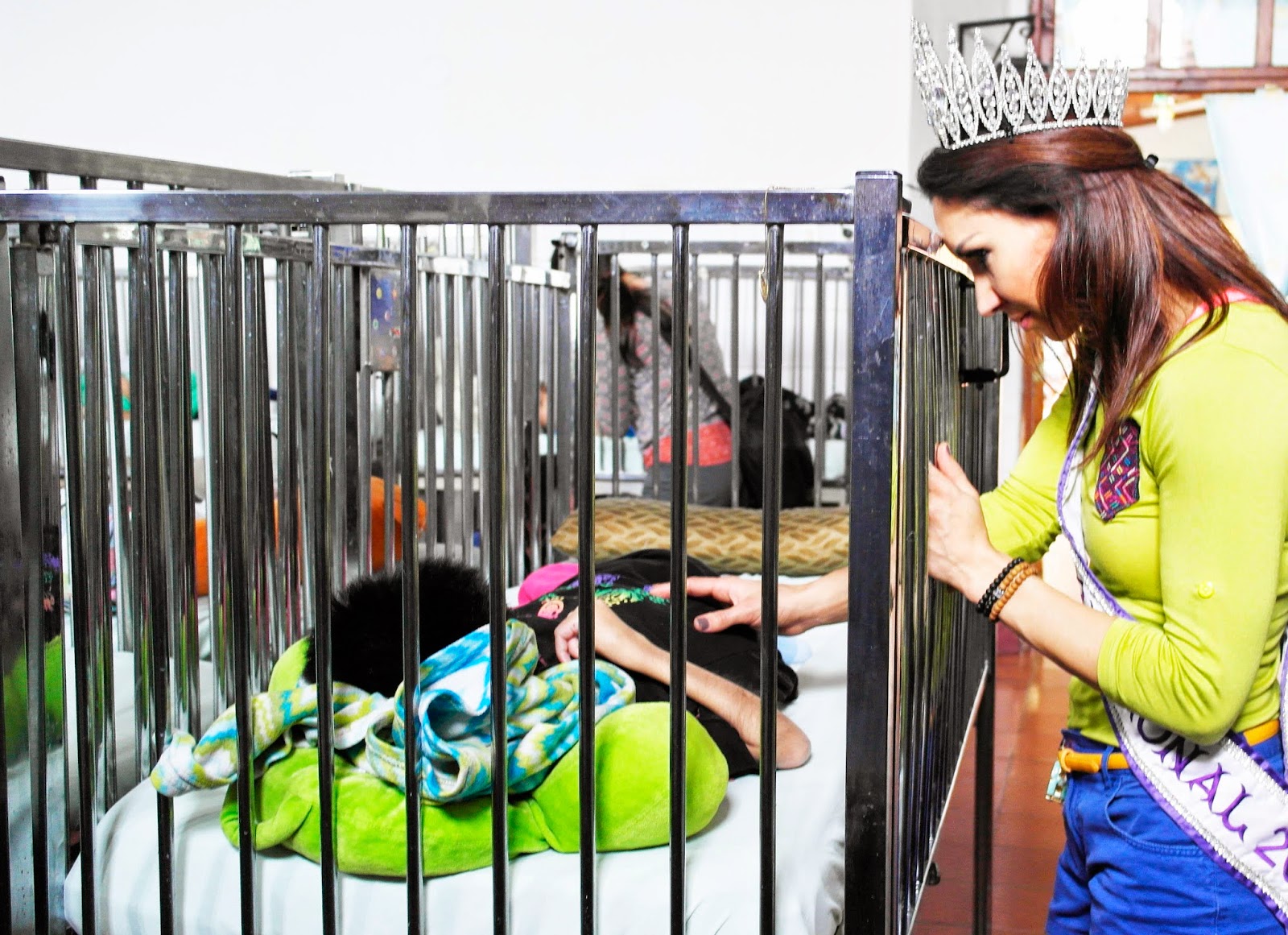 One of the patients who spends everyday in bed, except to got out once or twice a day to be taken to the restroom, fed, bathed or secured to a chair outside for a short period of time.

If the Tuesday March 24th departure from Omaha to Guatemala had actually happened, I would have never met Noel, or Rosalinda, or any of the others I was able to give love that day. I was meant to miss my flight.

We had a great team from all over the United States and Canada. I would especially like to thank Cindy Werlinger who competed for Mrs. North Dakota International last November, Kayla Hooty who reads all of our International Pageant blogs (thanks Kayla!), Allen Perry who is a friends son and Ryan Onstad a local friend from our church. It was amazing to see these trips change each person life as we connected with hundreds of children across Guatemala through the simple gift of shoes.

I would really like to thank the International Pageants that have been helping to collect shoes at their pageants or send in shoes, all of you fill my heart with SO much joy. Thank you to the moon and back!

Here are some highlights from the trip! 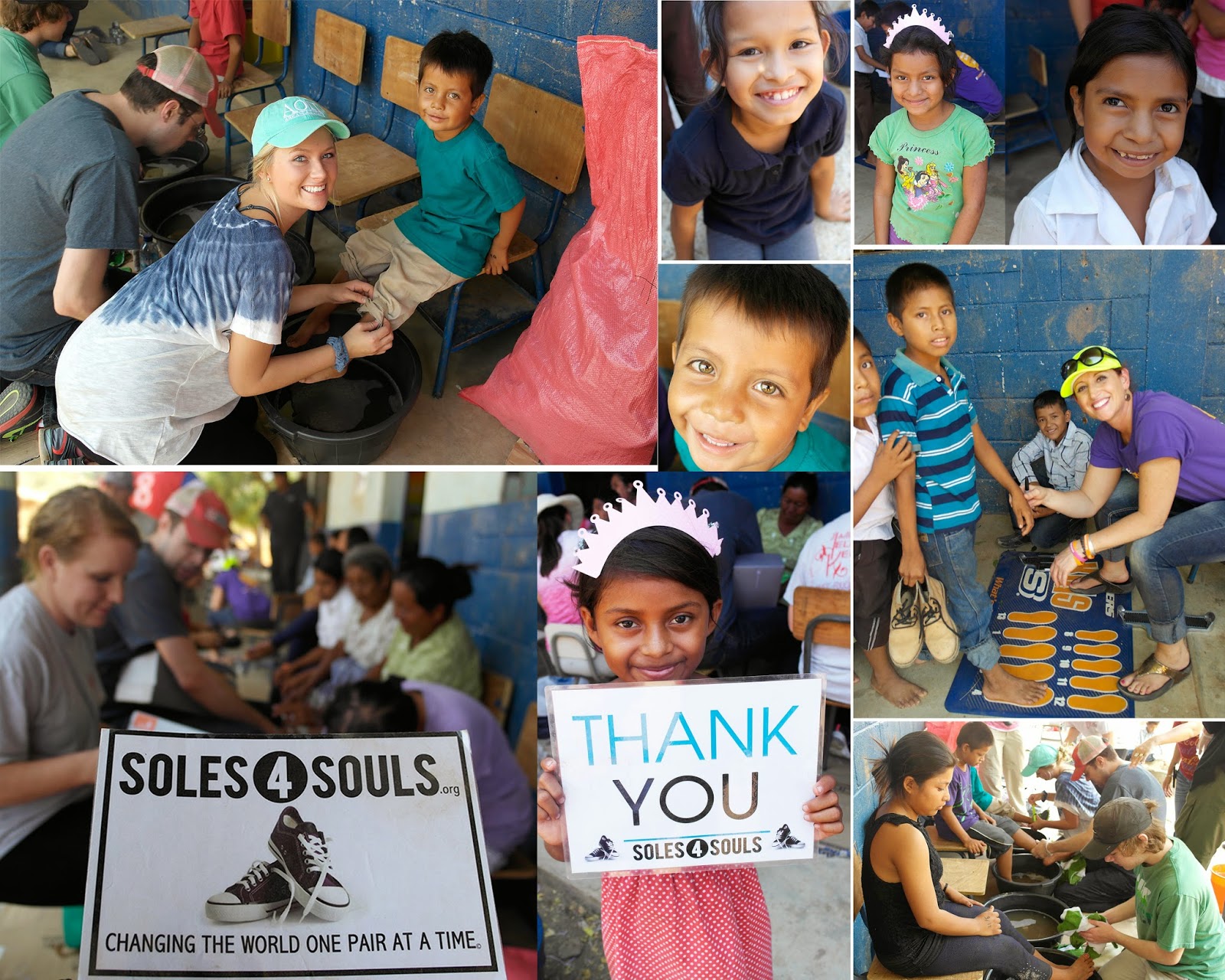 Highlights from the distributions of our team at work and the happy kids after getting their shoes from Soles4Souls! 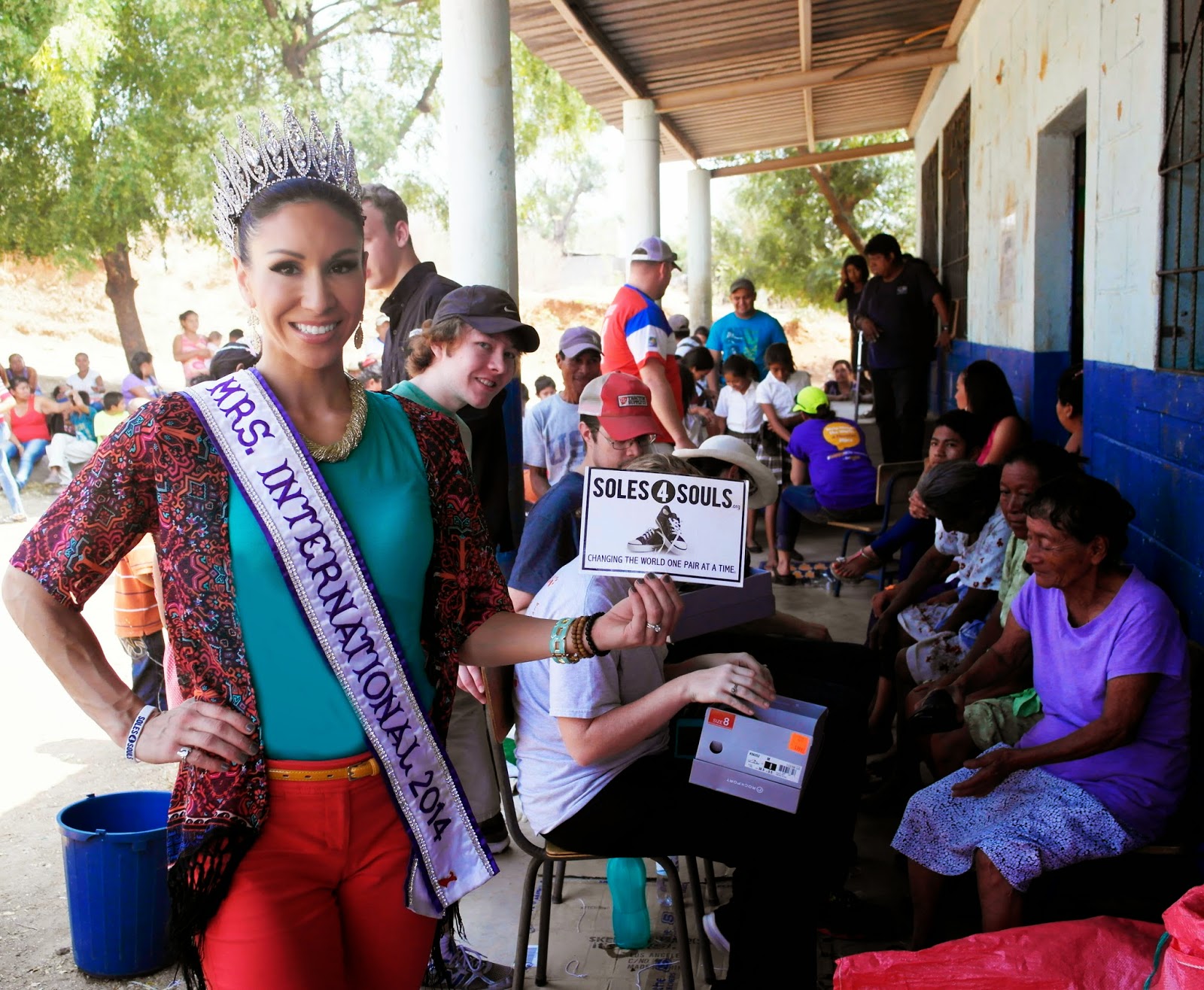 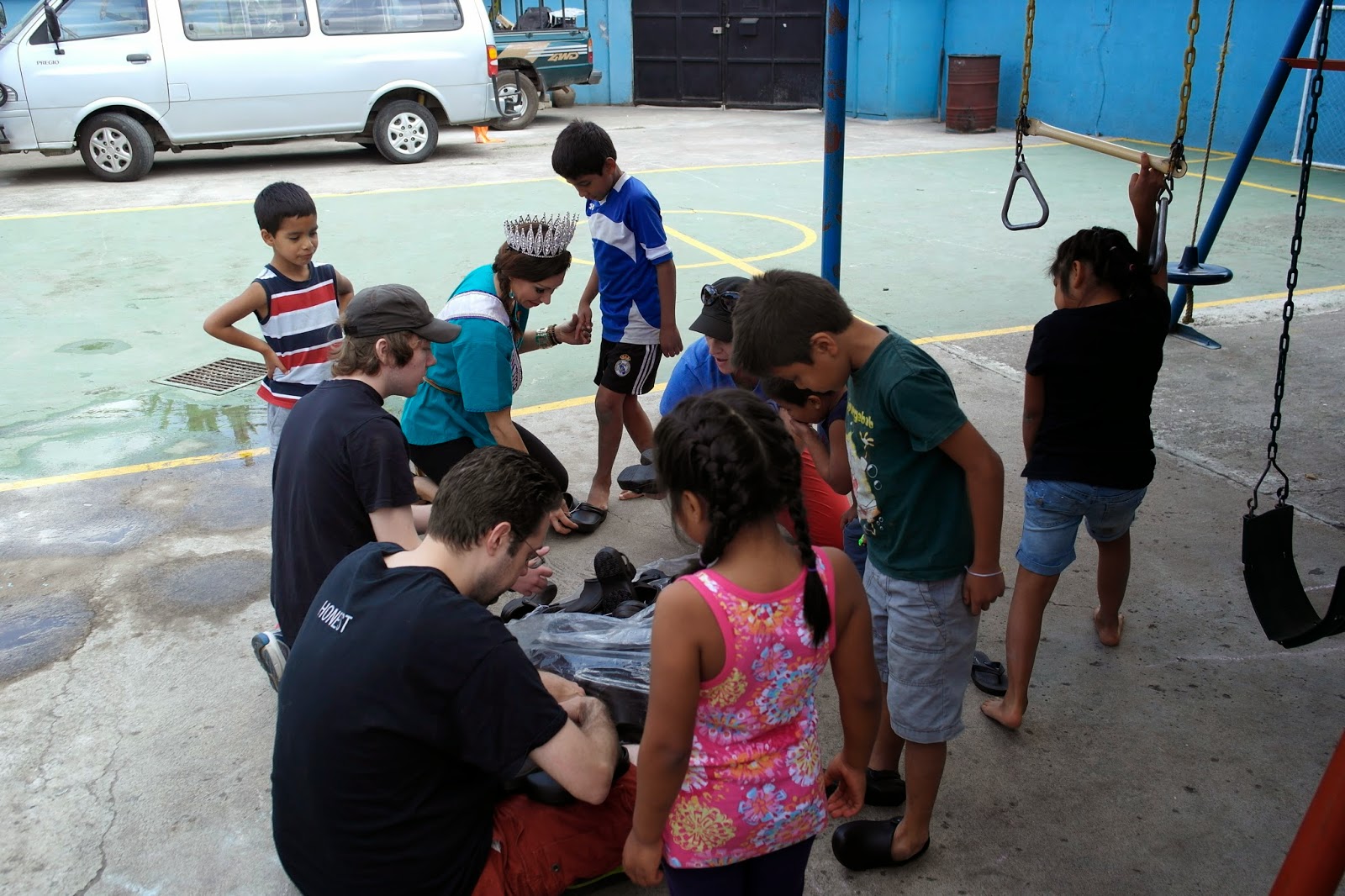 Rosella was saved as a baby (top photo) from a “chop house” which people abduct children to take their vital organs and resell on the black market. She was taken to an orphanage where she has been since and it was so neat seeing how happy she was AND try on the crown! 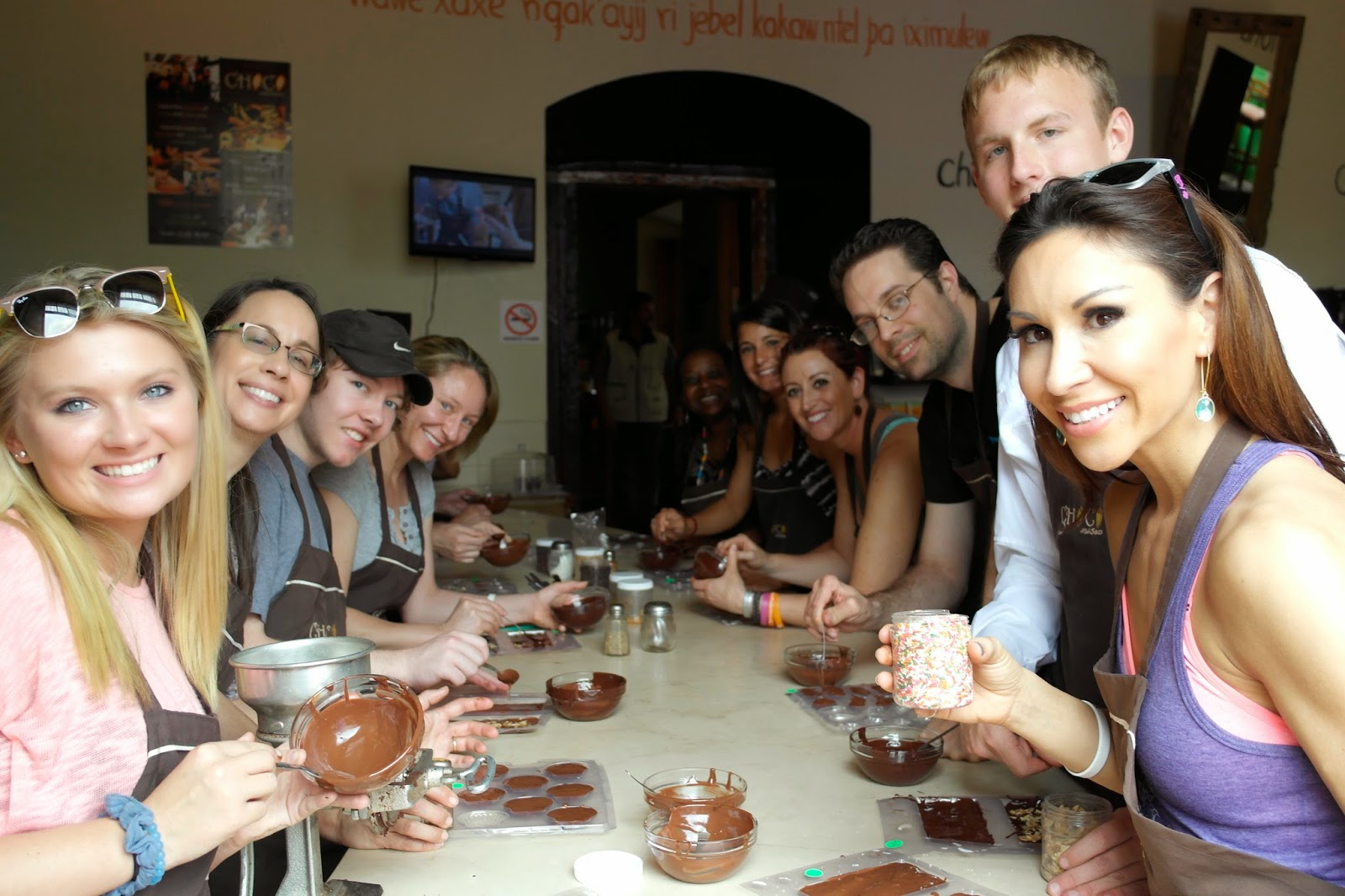 We did a fun team outing and we made chocolate from scratch! It was absolutely amazing to see the process and even make our own chocolate. Everyone loved it!

Hope to see YOU on the next trip to help wear out poverty, give shoes and give love! To see the full list of trips from Soles4Souls, visit this link : http://soles4souls.org/travel