My elderly family members mean the world to me, and for the past few weeks they have had to make transitions that they had never imagined for themselves.  I cannot go a single week without visiting at least one grandmother, but for about three weeks the visits have not been quite what they used to be.  You always hear people say that when they become elderly they would rather lose their mobility, as opposed to their mind, or vice-verso.  In my family I have one grandmother experiencing one of those scenarios, while one grandmother is experiencing the other.  To me both seem to be very hard to actually live through, but my grandmothers still keep their heads up and persevere.

My Great Grandmother Webb turned ninety-two this summer, but you would think she is still in her seventies by having a conversation with her.  She had a stroke two years ago causing limited use in her right arm and slurred speech.  She stayed in her home for several months with the supervision of my mother, Great Aunt, and grandmother alternating every night. Grandmother Webb went through months of Physical Therapy hoping for a full recovery, but unfortunately that never happened.  They moved her into an assisted living facility in February of that year, where she stayed for nineteen more months, until she suffered from a second stroke a few weeks ago. This time causing the left side of her body to be temporarily paralyzed.  She was transferred to a rehab center a few towns over, and now she is staying in our local nursing home and rehab facility.  Thinking back to when I was a child I would never have thought this for Grandmother Webb seeing that she has been incredibly independent and a hard worker until her first stroke.  Now, she is still a hard worker, striving to get as mobile as possible, and I could not be more proud of her. 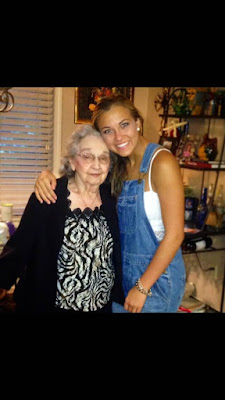 This is Great Grandmother Webb

As for my Father's mother, I call her Meme, she is perfectly mobile at the age of eighty-seven.  However,  she is suffering from Advanced Dementia.  When I visit her I am asked the same question multiple times, and she cannot remember what she said or did in the last thirty seconds, but she remembers many childhood stories in detail.  Every time I visit her, she puts a smile on my face telling me stories about her “days on the farm.” (Of which I live on, that her Grandfather founded in 1891) Her children have now decided that she should be moved into an assisted living facility so she will be in safe hands.  Again, I would have never thought this would be the case for Meme.  I stayed with her all summer, every summer. She taught me how to play golf, and how to be a lady. I can never thank her enough for everything she has done for me. 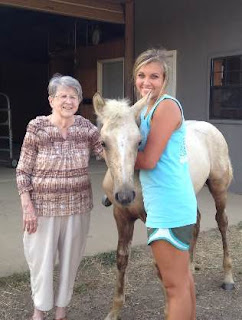 This is my Meme and a colt named Apollo
I read a statistic that around one million elderly people regularly go an entire month without speaking to a friend, neighbor or family member. This broke my heart.  Our senior citizens' generation worked so hard to keep a roof over their head and food on the table for their families, and many of them are now all alone.  They deserve company more than anyone and we can learn so much from them.  There are many ways you can  help make a difference in the life of an older person.  You could help them around the house or in the yard, run errands like grocery shopping, or visit residents of a nursing home or assisted living facility just to name a few. I challenge you to  spend just thirty minutes or more a week with and elderly person.  I am sure we all have one in our lives.

“Nothing is impossible, the word itself says 'I'm possible.” - Audrey Hepburn