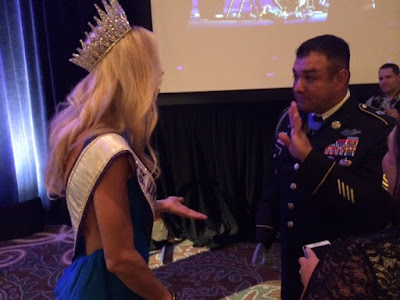 Recently, I was invited to attend the 240th Happy Birthday Navy Ball. I have attended army balls in the past when Justin was still in active duty so I thought I had a pretty good idea as to what to expect before I arrived. Well, all you Go Army, Beat Navy people out there the Navy is definitely taking the win for the production they put on every year to celebrate their birthday. They not only sold out of their ticket sales (which goes back to veteran organizations), they fly in high profile guests and choose different guests to honor that have made an impact on the United States Navy.

It truly was an honor to meet Sgt. 1st class Leroy Petry, an Army Ranger just like Justin. Leroy is the second living recipient of the Medal of Honor for the wars in Afghanistan and Iraq. He lost his right hand while throwing a live grenade away from his fellow soldiers. Petry became the ninth service member to receive the nation's highest award for valor in those conflicts. He now wears a high-tech robotic artificial hand. Because he made the split second decision to throw away the live grenade, not only himself, but 2 other soldiers lived. Had he not chosen that route, he would probably still have his hand, but the other 2 soldiers would not have survived he told me. 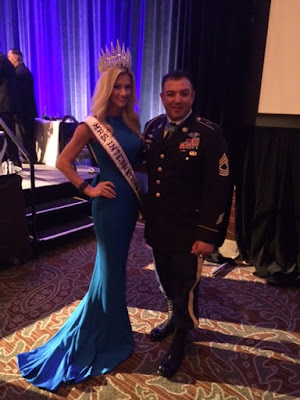 These are the types of decisions that our nations bravest face while deployed. To save only themselves or to save their brother. They willingly, without even thinking, choose to protect each other (and we back home). They do things that most of us could not and would not be able to do and because of that they deserve our continued support.