Last weekend I attended the Adapted Athletic Soccer State Tournament in Stillwater Minnesota. Along with two of my favorite people, Gabby Taylor - Miss Teen Minnesota International 2012 and Becky Thoreson, a former Miss Minnesota International.  We were ready to cheer on all of the fantastic athletes. Even though all of the teams at this tournament deserve a great fan section, we had a secret favorite! The Park Center adapted soccer team is one of the best in the league. I got to know one of their best players, Auggie, a few weeks ago during an Adapted Sports end-of-the-season celebration. I think I was more excited to see him than he was to see me! Auggie has a great sense of humor and always lets me razz him a bit. It didn’t take long before all of Auggie’s teammates came to see what the girls in rhinestones were doing talking to their beloved Auggie. 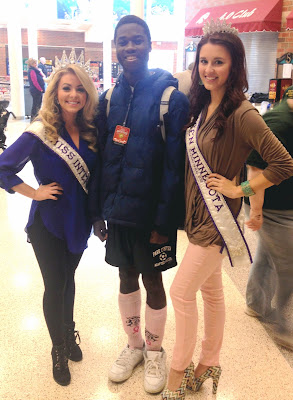 I was told that Auggie held the team record for most goals scored this season. They weren’t kidding because as soon as their game started, Auggie scored a goal! The Park Center team took home second place in their tournament. Way to go PC! I have an extra special love for the team because I attended Park Center High.  Cheering from the stands reminded me of my days of high school sporting events. 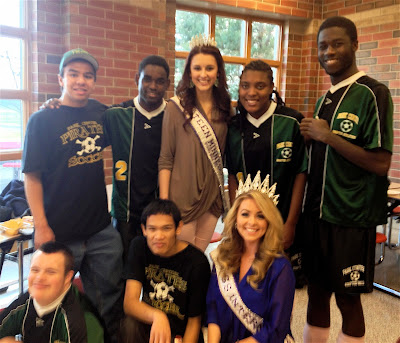 Auggie and the rest of the team were presented with special awards based on their individual accomplishments during the season. Auggie was awarded leading goals with over 100 goals scored this season, and a few players even made all conference! 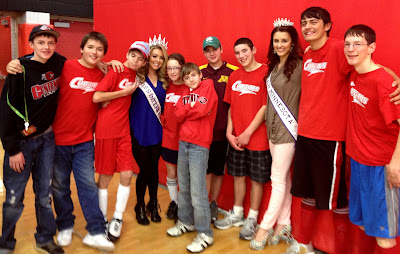 The other teams were getting a little jealous of all the attention we were giving to the Park Center Team so we stepped away to sign autographs and take pictures. The Cougars hung out and helped cheer on the Park Center team with us while we took more pictures and signed autographs for each one of the team members. 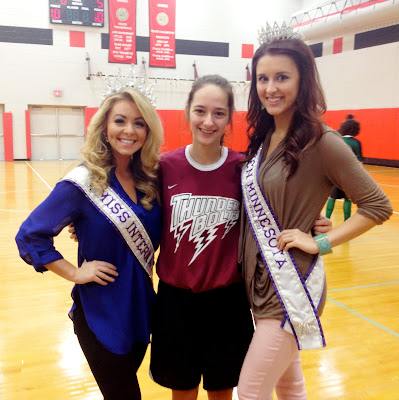 Before leaving, we peeked out head into the gymnasium and SURPRISE! Our very good friend Manda had just won a big game and her whole team was going crazy. I didn’t think she could be any more excited, until she saw Gabby and I, and somehow she smiled even bigger as she ran towards us screaming and giving us both big bear hugs! Manda came and watched us compete at nationals with her mother, a former Mrs. Minnesota. We were so grateful that they made the long trip to come cheer us on. Manda is one of our biggest supporters and we were so thrilled to be able to congratulate her on her big win. So proud of you Manda, Auggie, the Park Center team, and the Thunder Bolts team!
Krista Wanous
Labels: Krista Wanous Miss International Miss International 2012