Across the Globe and Back Again!

I have just returned from Thailand with so many stories to tell.  In keeping the with the mission of the International Pageant system, the last three weeks I have been working my platform Internationally in the city of Chiang Mai.  My future blogs will cover many of the unique adventures that I have experienced along the way.  I apologize for being M.I.A. the last month. I was so overwhelmed with the adventure of my trip I just couldn’t sit still long enough to write!

As I have written previously, this trip was not designed to be a public relations tour full of black tie dinners and meeting local organizers.  I never wore a cocktail dress, and never put on a pair of heels. This was a down to earth, hands-in- the-paint, no make-up mission with an emphasis of teaching new creative skills to children with little to no English language skills. Cultural Canvas, an organization focused on the meeting the artistic needs of children was my partner in this adventure.   They served as my host organization and connected me with orphans and under-served children in need of mentoring and artistic diversions.

My first eight hours were spent at the lovely Ping Nakara hotel where I ate one of my last “western style” breakfasts of waffles and sausage, which I ate at poolside.  By noon, I had arrived at the home where I would be staying to work with children without families. Here I would experience a less-touristy Thailand.  Here I would learn that geckos live indoors and that ants will find any stray crumbs even if they are inside of your pants pockets – yuck!  But I also learned to love and appreciate the Thai people and their emphasis on cooperation, patience, and peace.

Thailand is a Mecca of artisans, from pottery to woodcarving that is seen in the many arts and crafts offered in the night bazaar.  However, many children lack basic art supplies such as crayons, paper, paints and brushes.  Every day, for five to six hours, I was involved in the activities I love, showing children to make art, make mistakes and feel the joy of creating something with their own hands.  I found some of the kids had great intensity when given the right environment and supplies. One thing I found interesting is how rigid the schools and education systems are. There is very little room for creativity or imagination. Most lessons are taught in a memorization method without room for outside thought, challenging or interpretation. Because of this, I was even more driven to bring a whole lot of fun and playful creativity to my time with the kids. 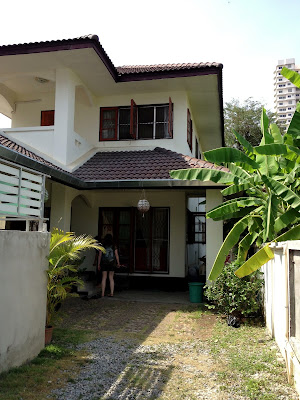 This was my home for my month in Thailand. The windows on the second floor lead into my bedroom. It was a beautiful view every morning and I could even see the cross form the nearby Christian church when I opened my eyes each day. I lived with 8 other girls who were form all areas of the world, Germany, Lithuania, United Kingdom and few American girls from New York and Boston. I found them all to be so interesting. Most of them were younger than I was and had been traveling for many months and still had many places to visit. It was very inspiring!

Our house had no air-conditioning and very simple amenities. We were dependent on the cool breeze of a fan or the chilly drizzle of an ice cube from the freezer on days that reached over 100 degrees with was most days! The rain was a blessing at night and would cool off our house almost immediately. Often, we would shower in our pajamas just to stay cool throughout the night. 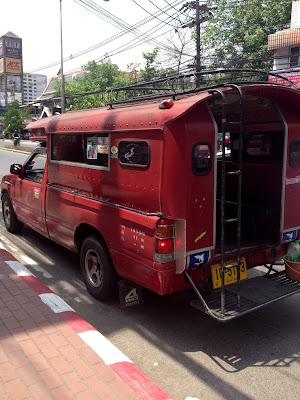 We rode around town in these red trucks. They were cheap and very quick! However, sometimes the driver didn’t know where he was going and would drop us of on the opposite side of town. In that case, we grabbed a Tuk-Tuk, a bit more expensive but the drivers usually spoke better English. I tried hard to learn the basics of the Thai language before and during my visit, but honestly, I wasn’t good. Most times, the Thai person I was speaking too would just laugh at me and say, “Pretty round eye from America,” and proceed to touch my blonde hair. They were very sweet and usually managed to figure out what I was trying to say. I have never felt like such an odd ball in the crown though. In America, I look like very other blonde haired light skinned girl on the street, in Thailand, I stuck out like sore thumb. I was gawked at more than I was at home parading around in a giant tiara! 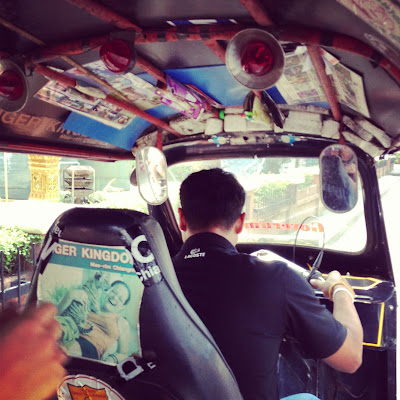 I was happy to not be driving on these roads. The traffic is absolutely crazy. Mopeds, cars, tuk-tuk’s, and red trucks are everywhere and riding in the most unsafe conditions. In most cases, nobody is following any kind of laws from what I can tell, and sometimes they just drive on the complete opposite side of the road. The scenery was beautiful and I was thankful to have that to focus on during our “close calls”. 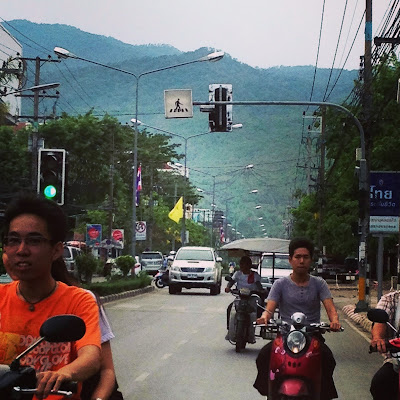 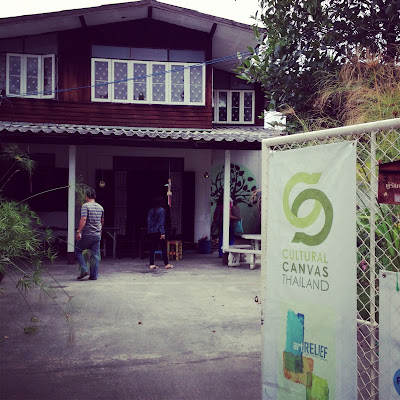 This is where our Cultural Canvas offices were located. It was a modest home with a big art supply closet and open yard to invite the neighborhood kids in to do projects. Although we traveled around the city to other facilities everyday, this is where we started and ended each day.