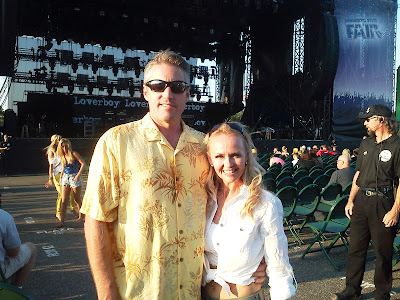 It would be nearly impossible to graduate from high school or college in the eighties and not know the music of Journey, Pat Benatar and Loverboy. Joe and I had a fantastic time at the outdoor concert with all three on Saturday night, September 1st!

Loverboy was one of my husband’s absolute favorites to listen to when he was in the Air Force. Pat Benatar interacted with the audience along with her husband of more than 30 years, Spyder, which was fun. They met in New York in 1979, and within 28 days had moved to Los Angeles and produced their first hit album.

If you haven’t seen the lead singer of Journey perform, he was discovered on YouTube and is simply amazing. His name is Arnel Pineda; he is from Manila and was once homeless. Not only does he have a voice that rivals Steve Perry, but he has a high energy style on stage that keeps the audience engaged.