The Importance of Board Membership

For many of the women who participate in the International Pageant System, serving on a board of directors for a given charity or non-profit organization is a responsibility for which we have decided to commit. This level of service and passion regarding charitable work is one of the many attributes of the Mrs. International Pageant that motivates women from around the world to seek this prestigious title. My personal road to serving as an officer on the National Board of Trustees for the Phoenix Society for Burn Survivors started years ago.

In 1995, just months after I was released from the hospital (after being severely burned in a helicopter crash), I found myself volunteering to meet with burn victims and family members in an informal manner. I was compelled to connect with these people who were in pain and scared, and to assure them they could become survivors.

As the years progressed I was introduced to the Phoenix Society, and specifically the Survivors Offering Assistance in Recover (SOAR) program, which was a new concept in 2001. SOAR was developed to connect those who had endured a burn injury with those in the process of treatment. I quickly volunteered at Regions Hospital to be trained. Shortly after I completed the SOAR initiation, I was asked to join the National Advisory Committee for the organization and went on to become the Co-Chair of the committee.

A year later Amy Acton, Executive Director of the Phoenix Society formally asked me to submit my résumé to the National Board of Trustees for a position on the board. I accepted the invitation, knowing that there were serious commitments involved in participating on such a board; significant travel, financial commitment, and a dedication of time and energy to serving the burn community. The board voted affirmatively and I was promptly elected as the Chair of the Investment Committee. Soon after, I was elected as Treasurer of the organization, and last year was elected as the Vice President.

I am sharing the journey of serving a non-profit with you, because for those who may not know, the commitment is very real and very important. Serving on any board, for that matter, is an opportunity to lead, to make change when necessary, and a responsibility that should not be underestimated. Fortunately for me at the age of 46, I have had many opportunities to serve on boards of various types; corporations, charities, non-profits, foundations, professional organizations and community groups. In nearly every case I have chaired committees, served as an officer, and on almost each board served as President or Chairperson of the Board. Regardless of the type of board, I have consistently taken my role as a leader to heart.

I could not be more honored to be affiliated with the Phoenix Society, which is the largest organization of its kind, serving the burn community throughout the world. Both the members of this board, and the staff who get the job done every day, are exceptional individuals who have a sincere passion about the mission of this organization. In the center of this photo is the founder, Alan Breslau (seated in the wheelchair) , to his right is our Executive Director, Amy Acton and I was thrilled to stand to his left. The remaining members of the Board of Trustees who were in attendance at our meeting in Milwaukee, WI on September 12, 2012 are (left to right); Don Cheley, Billy Leahy, Vickie Pritchett, Tim Sendelbach, Pat Horan, Tony Burke, Lorraine Carli, Peg Paul, and Dr. Lynn Solem. 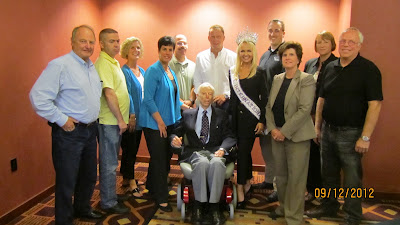 Submitted with respect and appreciation,