The mythical bird called the Phoenix was the inspiration for a society focused on rising from the ashes and being reborn more brilliant than before…just as the legendary bird. In 1963, Alan Breslau was extensively burned in the crash of a commercial airliner, and he went on to become the Founder of the Phoenix Society in 1977. Today the organization is the largest of its kind, and though it is based out of Grand Rapids, Michigan, it has reached the burn community around the world.

Alan worked tirelessly to expand the burn survivor network from an office in his home in Pennsylvania, and even with modest resources was able to touch thousands of lives. He retired in 1998 and the Board of Trustees worked hard to raise the necessary funds to hire and Executive Director and developed a strategy to fulfill Alan’s dreams. 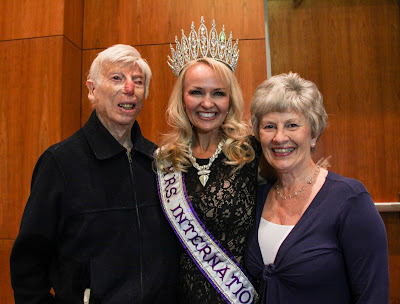 It was my privilege to visit with both Alan and his lovely wife Delwyn during the World Burn Congress earlier this month. Alan also signed a copy of his book “The Beauty of Disfigurement,” which I am currently reading with awe and respect. The Breslau’s now reside in New Zealand, and I hope to connect with them in early 2013 during a tour as Mrs. International that will take me to the neighboring Australia.