When I contacted the local Alzheimer's Association and told them I would be happy to help with this year's Walk to End Alzheimer's, I never imagined they would ask me to be part of such a special piece of the day.

The "Promise Garden" features four flowers:
Purple - for those who have lost someone to Alzheimer's or dementia
Yellow - for those caring for someone with Alzheimer's or dementia
Blue - for those living with Alzheimer's or dementia
Orange - for those who advocate for the Alzheimer's and dementia efforts
The opening ceremony for the Walk allows one representative of each color to present and say a few words. My grandmother, Ga, lived with dementia and it was so difficult for our entire family. When the event coordinators learned of this connection, they asked me if I would present the orange flower - as someone who was not only directly affected, but someone who as a titleholder has the ability to be a public advocate.
I can't remember a day where it rained so hard and steady for as long as it did the morning of the walk! However, spirits ran so high and everyone was excited to Walk to End Alzheimer's! Over 2,000 walkers registered and together we raised more than $186,000. I am so honored to have been able to be a part of such a special and meaningful event. 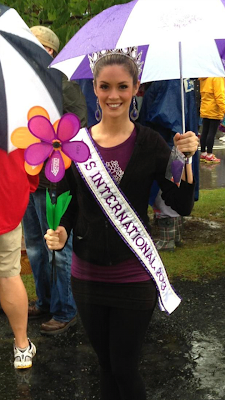 All set for the walk, thanks to my International Pageants umbrella 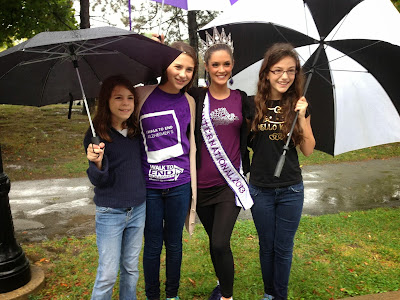