I was sitting in Mrs. McNamara’s eighth grade religion class when the announcement was made: two planes have crashed into the World Trade Center. I, like the rest of our nation and much of the world was forever changed on that day. I have always felt connected to (and in love with) New York City. It is one of the many reasons I chose to attend Iona College – its close proximity and accessibility to the “concrete jungle where dreams are made”. The opportunities, the excitement, and most of all the diversity make the city so special to so many.

Iona College lost 15 alumni in the attacks as well as 2 first responders on that day. On September 11, 2013 I was back on campus to honor their memory. The ceremony was so touching and heartfelt. Even though Iona is a Christian Brothers College, prayers of Catholicism, Judaism, Buddhism, and Islam were said to represent all those that were affected and continue to mourn loved ones taken too soon – it was a beautiful touch. Even as the years pass, the vivid memory and pain is still as present as ever. We truly will never forget.

I am so proud to be a New Yorker and an American each and every day. Thank you to all those who serve and have served our country in order to protect our freedom. 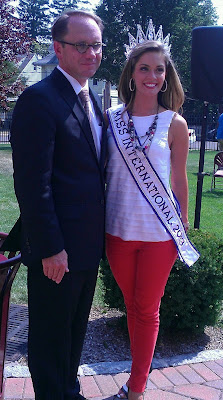 With the President of Iona College, Dr. Joseph Nyre, following the 9/11 Ceremony