I bought my prized ticket in June and have done everything possible to ensure I would remain free one special Saturday in October to see a man called Buck. Little did I know I would become Mrs. International, therefore it was tough to pull off when so many other great opportunities awaited.

After inviting my dear friend Jennifer to the event, we struck out on our 2-hour road trip to Poplar Grove. At one point I had to post a location on Facebook to figure out where we were as we drove through a number of cornfields. And then we arrived in the middle of…a cornfield. But I do love a good farm and so it was a piece of heaven. 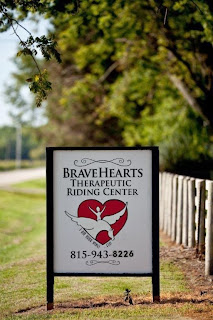 The event was a fundraiser for Brave Hearts Therapeutic Riding and Educational Center. They provide equine therapies to children and adults. This particular event raised money for military veterans receiving equine therapy to help with physical challenges and PTSD. We all came to raise money and watch Buck Brannaman work with young horses that had yet to be “broken.”

Buck is a horse miracle worker. He got his start at a very young age. As kids, he and his brother travelled the country and were on the “Ed Sullivan” show for their talented rope tricks. Behind the scenes was an abusive show dad who felt even perfection was not enough. Buck says the abuse only worsened once his mother passed. But someone at school noticed his bruises and made sure he and his brother didn’t remain in their father’s violent home one more day.

Instead, they lived on a ranch with other children in a foster home. His foster father, who he called “Dad,” wanted Buck to have a skill on which to fall back if needed, so he taught Buck how to shoe horses. Through working with horse trainers, Buck quietly became known as the “Horse Whisperer.” He has an amazing way of working with new horses or those horses with a laundry list of behavioral issues. He performs magic on these horses others felt were a lost cause. In fact, Robert Redford, says much of the movie, “The Horse Whisperer,” was based on Buck who was the consultant for the movie. 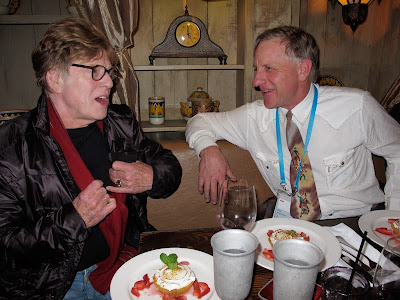 Buck’s belief is horses don’t need to be “broken,” through intimidation and threats. Because of his own abusive childhood, he realized you can gain respect through respect which is done by approaching a horse from their perspective, you can then understand what makes them tick and that in turn helps you communicate with them. Intimidating them or scaring them isn’t the answer. The same goes for people. 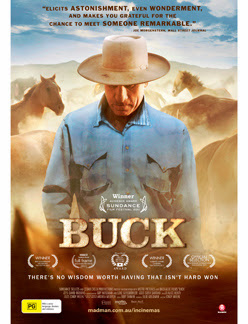 Through the award winning documentary, “Buck,” he has shaped the way people from all over the world, horse fans or not, have come to look at the way we as individuals relate to others, such as animals. By the way, it is one of my all-time favorite movies. The cinematography is breath taking too! Netflix it.

So on that Saturday, we watched Buck go to work with a 3-year-old filly who had not yet been trained. Within an hour we watched him gain her fragile trust and her cooperation. And by the time he was done, she was allowing him to saddle her, ride her and other such tasks she will have to do in her coming years.

Watching him build that trust with the young horse even caused Jennifer to cry. Now, she won’t be jumping on horse or anything like that, but I was so pleased to share this special event with her and to know it affected her as well. And to know we are helping others get needed therapy is what brought us all there. 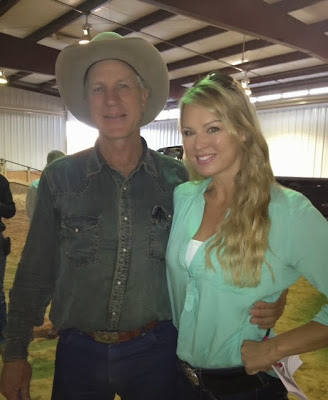 Thank you Jennifer for encouraging me to talk with Buck. I was so nervous!

It was a true highlight to then be able to meet Buck! I rarely get star struck…but I was by him. I told him about CASA and our work with foster families and children. And I was able to tell Buck how much I admire him and appreciate the good done for both horses and foster families because of the documentary. It was well worth the 4-month wait and the journey getting there.